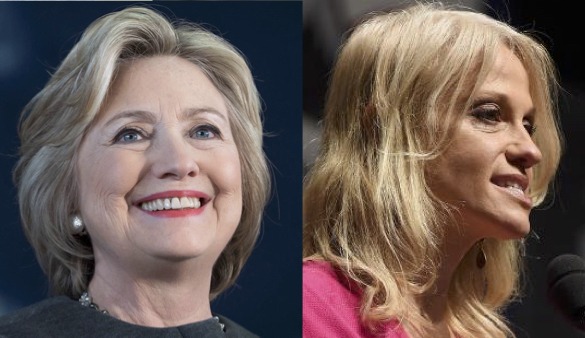 Even as Donald Trump’s campaign manager and seeming primary handler Kellyanne Conway continues to gloat over his illegitimate and numerically upside-down victory in the presidential election, and even as recounts across the nation seek to overturn that victory, Conway finally got a taste of her own medicine on Thursday night when she made the mistake of appearing on stage with Hillary Clinton’s top staffers. After she began trying to gloat, they collectively called her out on her despicable campaign strategies, to her face.

Hillary Clinton’s Communications Director Jennifer Palmieri first spoke up when Trump strategist David Bossie began praising his campaign-mate, white supremacist Stephen Bannon. According to a CBS News report, Palmieri fired back with “If providing a platform for white supremacists makes me a brilliant strategist, a brilliant tactician, I am glad to have lost. I would rather lose than win the way you guys did.” But this prompted Kellyanne Conway to use the serious moment as an opportunity for gloating.

After Conway tried to brag about how Trump had supposedly done a better job of connecting with voters (even though Clinton received 2.5 million more votes than Trump did nationwide), she then asked “”Do you think I ran a campaign where white supremacists had a platform?” Palmieri fired back, “You did!” But she wasn’t the only top Hillary Clinton campaign staffer to jump in.

“There were dog whistles sent out to people,” affirmed Clinton’s chief strategist Joel Benenson in reference to Trump’s thinly disguised racist tactics. “Look at your rallies. He delivered it.” Kellyanne Conway then responded with what might have been one of the weakest comebacks of all time, whining “Hashtag he’s your president.”

Yes, according to the Washington Post, Conway actually spoke the word “hashtag” out loud. This is the most direct and public pushback by Hillary Clinton’s team to date, even as the various recounts have raised the possibility that Clinton may end up winning the election after all.