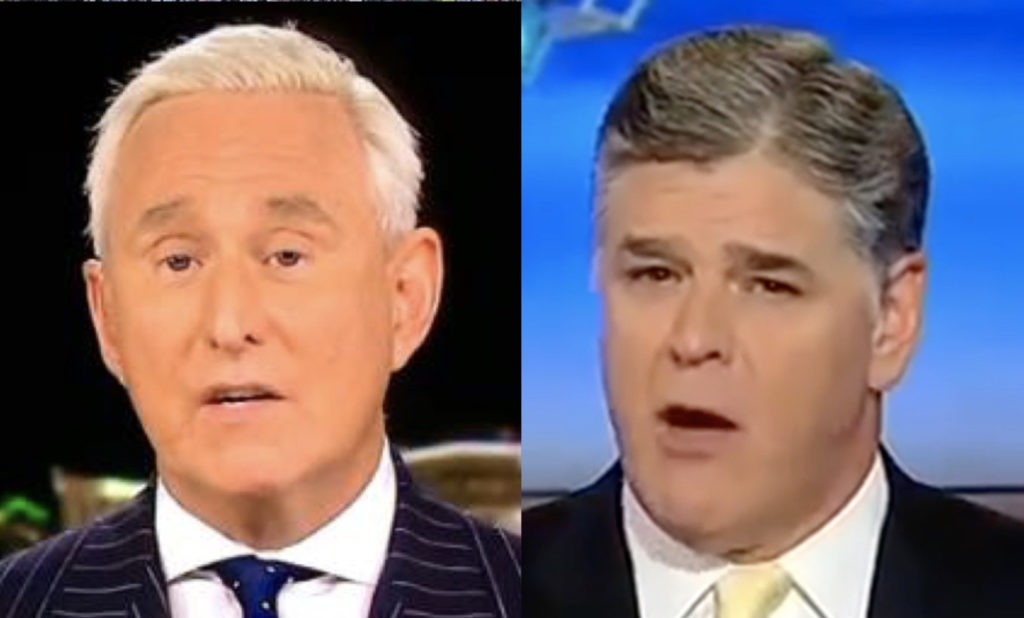 There’s perhaps no more sure sign of an administration falling apart than when its key allies begin bickering with each other in public. And as Donald Trump continues to be backed further into a corner, with his approval rating in the toilet and his scandals mounting, two of his closest friends in the political world are now openly bickering with each other.

Trump’s longtime friend and former campaign adviser Roger Stone began the bickering by tweeting out of nowhere that “Sean Hannity and his lackey Bill Shine blocked me from Fox because I blocked Sean’s insane effort” to become Donald Trump’s White House Chief of Staff (link). This was the first time anyone has claimed that Hannity was eyeing the Chief of Staff job, and Stone offered nothing to back it up. But he continued his tweet-ranting, claiming that with Bill Shine now having been ousted from Fox News, Hannity is “next.”

This prompted Sean Hannity to fire back: “Roger, with all due respect, I NEVER EVER ASKED to be considered for any WH job, nor would I ever have accepted, nor is that my skill set (link). He then continued “There was never any ‘HANNITY EFFORT’ to kill. But if I was asked I would have painted the Oval for @POTUS and I would have done a good job.”

Of course the bickering between the two Trump allies is likely driven at least partly by the fact that they’re both currently in a lot of trouble. Sean Hannity is mired in a sexual harassment scandal that could cost him his job. Roger Stone is widely believed to be one of the key suspects in the FBI’s investigation into Donald Trump’s Russia scandal that could cost him his freedom. No wonder they’re taking it out on each other. Help fund Palmer Report