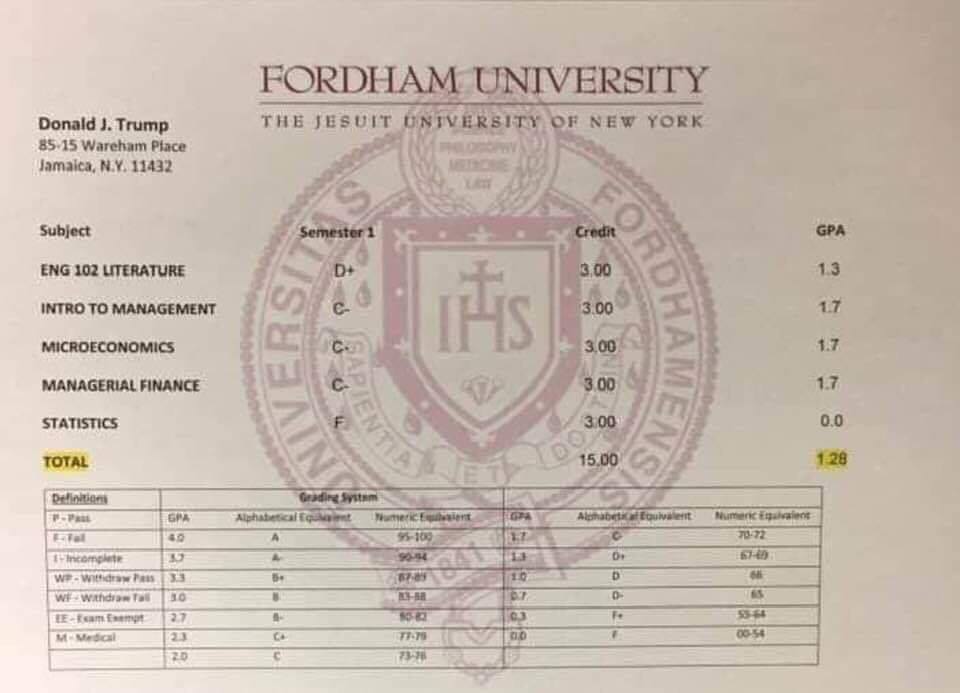 Last week Michael Cohen publicly testified under oath that he sent a series of threatening letters aimed at preventing Donald Trump’s grades and SAT scores from becoming public. This was widely interpreted as a sign that Trump’s grades and scores were embarrassingly weak. This week an image began widely circulating on social media which appeared to be Donald Trump’s report card from Fordham University. But is it real?

On first blush, the “report card” seems to fall in line with the kinds of embarrassing grades that one might expect from someone who, fifty years later, is still trying to have them suppressed. Donald Trump purportedly received a D-plus, an F, and three C-minuses in his five classes. But questions immediately surfaced about the report card’s legitimacy.

Various eagle eyes on social media noted that the home address listed for Donald Trump was actually from when Trump was a toddler, not college age, and that the font used on the report card doesn’t appear to have even existed back then. But the biggest concern was that no one could seem to figure out what the original source was for the report card. Our attempts at tracing its origin proved fruitless.

Now Fordham University itself has released a statement on Twitter, saying “The image is a forgery, not an actual Fordham University transcript. Fordham University respects the privacy of its students and alumni, and follows federal law regarding the handling and release of academic records.” The University would have no realistic reason to lie about this. Considering that the report card was already highly suspect, this statement should put the entire thing to bed. Donald Trump’s grades may indeed be this bad or worse, but this particular “report card” is a fake.