Just before tonight’s Democratic debate began, Donald Trump tweeted that he was too busy to bother with the debate. Then true to form, just minutes after it began, Trump tweeted one idiotic word: “BORING!” That should have been it, right? No, as it turns out. Before the night was over, Trump went completely off the deep end over an absurd issue.

After the moderators switched off at the halfway point, an audio glitch forced MSNBC to take a commercial break in order to get it fixed. This prompted Donald Trump, for some reason, to go completely berserk: “NBC News and MSNBC should be ashamed of themselves for having such a horrible technical breakdown in the middle of the debate. Truly unprofessional and only worthy of a FAKE NEWS Organization, which they are!”

First, didn’t Trump just finish saying he wasn’t going to watch the debate? Second, this is the same guy who didn’t know he was on a hot mic when he yelled “grab em by the pussy,” so he’s the last one who should be criticizing others over microphone issues. Then, in an absurd attempt at getting attention, Trump tweeted a video of himself being reelected president in several future elections, including – we’re not kidding – the years 2028, 3000, 4000, 5000, 10000, and some year known as “EEEEEE.” No, really: 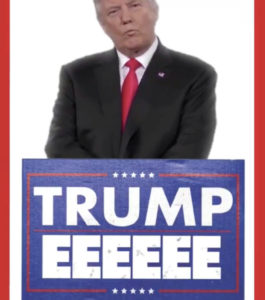 Meanwhile, back in the adult world, several 2020 Democratic candidates had a good night in the first debate, while others didn’t fare as well. Donald Trump seems obsessed with Joe Biden, so we expect he’ll be tweeting even more idiotically during tomorrow night’s debate.