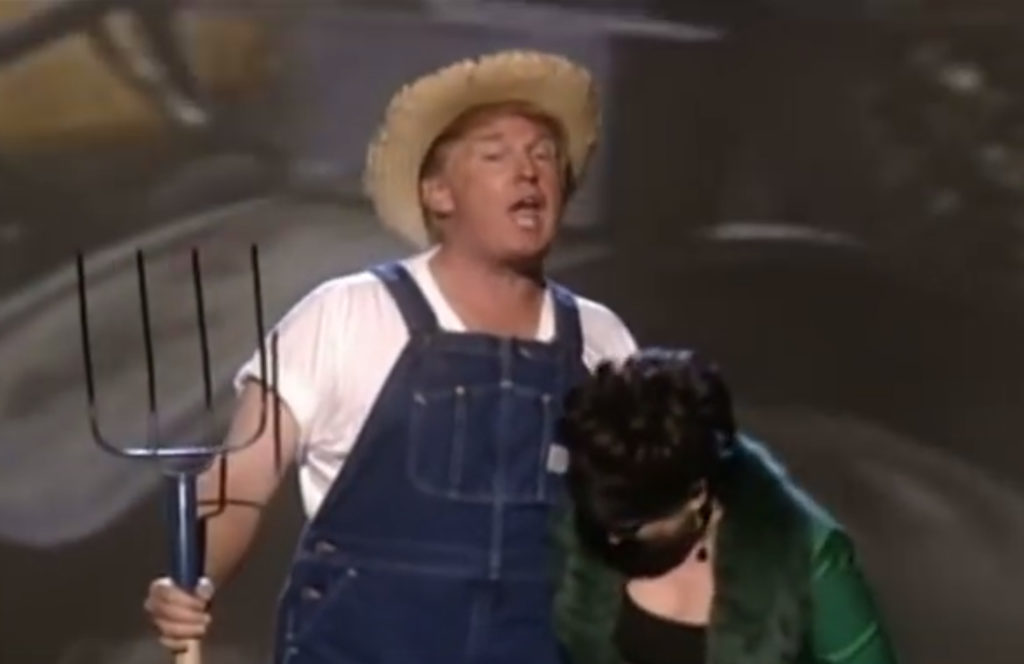 Donald Trump is having one of his worst days yet, the government and the economy are arguably on the verge of collapse, and no one can even figure out what’s happening amid the chaos. The only thing that could make things even stranger, and more alarming, would be if Trump posted a video of himself singing while wearing overalls and holding a pitchfork. So naturally, that’s precisely what happened. No, really.

Somewhere in all the chaos today, which saw the stock market plummet, the Secretary of Defense resigning in disgust, and the government preparing to shut down, Donald Trump decided to sign a farm bill. He announced it by posting this video of himself, ahem, performing:

For those wondering, the video is from the 2006 Emmy Awards, back when Donald Trump was merely seen as an ignorant buffoon, and not the psychotic traitor he’s since revealed himself to be. Actress Megan Mullally, who is also in the video, has made clear in recent years that she detests Trump. After he posted the video, she tweeted “if you guys need me, i’ll be in a hole in the ground.”

The responses to Donald Trump’s bizarre video tweet – particularly on a day like this – drew negative responses across the board. Some respondents on Twitter asked if he was trying to create a distraction, or if he was trying to lay the groundwork for an insanity defense. Even Fox News host Shepard Smith asked on air why Trump was dressed up in “heehaw regalia.”