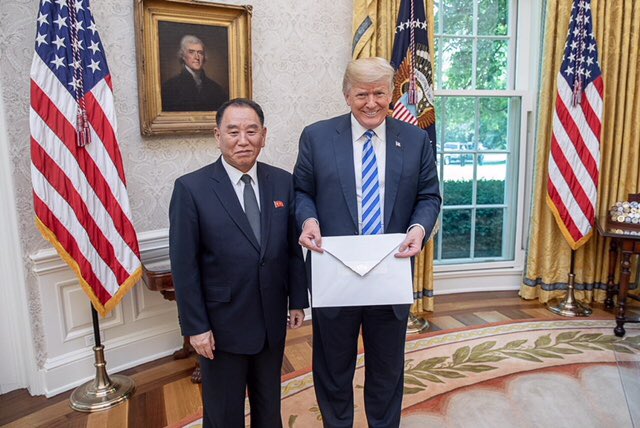 With all of the other various Donald Trump scandals that have been playing out and competing with each other for attention, the media and the public have at times lost track of the fact that Trump is pretty much definitely sliding down the road of senility. We’re not saying that because we don’t like him; we’re saying it because the evidence keeps making it more clear. One photo alone, taken today, helps spell that out.

We’ve all seen Trump get confused and blankly wander off in the middle of joint press conferences and signing ceremonies, only to be gently guided back by his handlers. We’ve seen him wander away from his own motorcade. We know he can’t get through a speech these days without completely losing the plot and rambling incoherently. In addition to his sociopathy or malignant narcissism or whatever defines this monstrous piece of work, he’s also slipping in the cognitive department. It’s getting worse.

Kim Jong Un has decided, for the moment, to put his summit with Donald Trump back on the table. Of course Kim has been using this process to toy with Trump all along, so there’s every reason to expect that to continue. For instance, Kim sent an envoy to the White House today with a letter for Trump. The letter was in an absurdly oversized, gag-gift level envelope. It was obviously designed to poke fun at Trump’s tiny hands. Trump didn’t get the joke. Instead he proudly posed for a photo with the idiotic envelope, oblivious to the punchline he just walked into:

We initially suspected this photo might have been a fake, but it’s since been posted by everyone from CNN to CBS News. Somehow, this is really happening. Out of context, we might be tempted to just brush this off as a moment of idiocy. But when you place it within the overall pattern of Donald Trump’s ongoing cognitive slippage, it’s clear that something isn’t right here. Trump’s last doctor tried to throw us off the trail with a phony medical report. Now that he’s been scapegoated, does Trump even have a doctor? He certainly doesn’t have a clue.