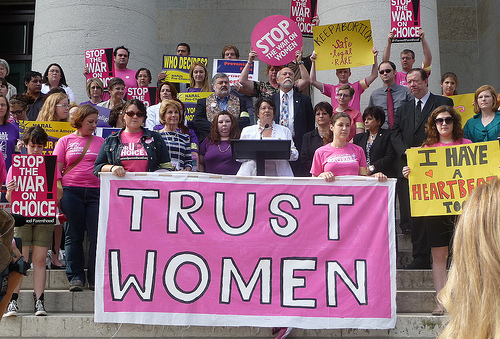 You’re going to have the kid, you’re going to bring him or her into a world with no universal healthcare, runaway gun violence, bigotry –and lots of victim blaming for you, if you also happen to be unmarried, now that you’re a single mother and all, thanks again to the old white guys. If it makes you poor and in need of welfare, the old white guys will run for political office on a platform that holds you and your predicament in extreme disdain. That’s how they get votes, in case you didn’t know.

Thanks to Governor Brian Kemp of Georgia, the most insidious exemplar of this idea will soon become enshrined into law in the State of Georgia, as of January 1st, 2020. Kemp’s new baby, if you’ll pardon the expression, is the latest in a series of what are known as “heartbeat laws.” The “heartbeat” these laws refer to is the noise that heart cells make when they are congealing into what will one day become an actual human heart. It’s a phenomenon that can be detected with an ordinary stethoscope at about six weeks into pregnancy. In other words, before a woman even necessarily knows she’s pregnant, and occurs before the fetus has a face. Before it has a brain, in fact.

When Rene Descartes proclaimed “cogito ergo sum” (I think therefore I am), he clearly didn’t have these human fetuses in mind. The contrapositive of that idea, “they are not because they can’t think,” is negated by the old white guys and their book. These barely congealed fetuses, according to the old white guys, are human souls. Six weeks, they insist, is when life begins. And that, according to Georgia law, is the end on the matter. All contradictions do not fit comfortably into their religion. In other words, never mind that the United States Constitution forbids their religion from having a say in this or any matter.

But wait, there’s more. What makes the Georgia version of this incarnation of the heartbeat law particularly evil is that any woman from Georgia, who travels outside of Georgia to another state in order to have an abortion in a state where abortion is legal, can be charged with accessory to murder when she gets home. If, on the other hand, you have your abortion in Georgia, you can and will be charged with murder, and may even be subject to capital punishment.

Naturally all of this will be put to the test by the higher courts, and if you think this is good news, think again. The old white guys and their 2000 year old book got that one covered, too. With the addition of Neil Gorsuch and Brett Kavanaugh to the Supreme Court of the United States, these heartbeat laws will probably get tested at the national level and assist those two evil men with their three evil fellow travelers in meeting their ultimate goal: to chip away at, and ultimately destroy, Roe Versus Wade. Welcome to the dark future of a lost America.