Now that the Wall Street Journal has pulled back the curtain on recently deceased Republican operative Peter W. Smith, who actively tried to collude with the Donald Trump campaign and Russian hackers (link), more details are emerging regarding just what he was up to. Part of that involves his Twitter account, which reveals some interesting replies and conversations.

Smith told other operatives that he was working on Russian election collusion with Trump adviser Michael Flynn, and he also listed Steve Bannon and Kellyanne Conway as being involved as well. Bannon and Conway have told the WSJ that they never worked with him, though Palmer Report was able to confirm that Smith worked with Conway’s husband (link). But more telling may be what Peter Smith was up to on Twitter, and with whom he was attempting to communicate.

For instance Smith – who went by the Twitter username @PTRSIH – posted these oddly specific denials about Russian collusion while attempting to interact with Trump adviser Sean Spicer and Trump’s close associate Sean Hannity: 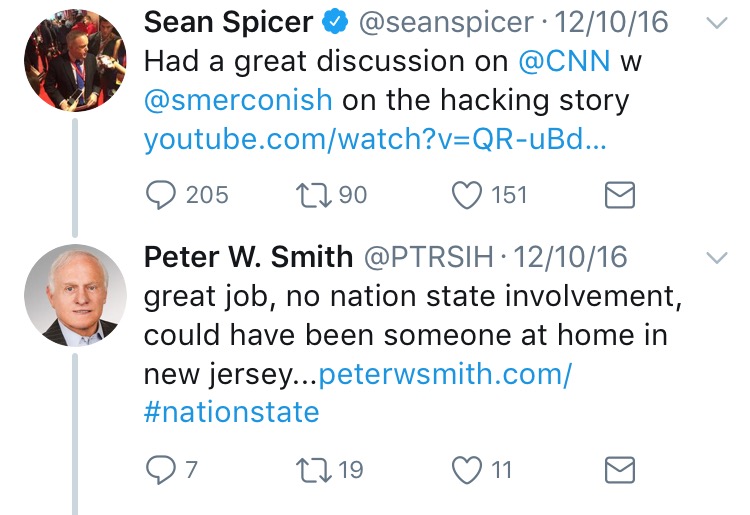 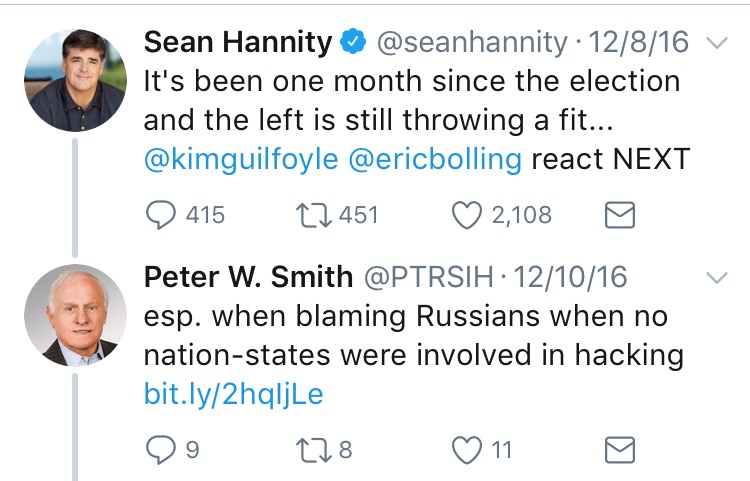 However there is no record of either of the Seans having ever replied to Peter Smith on Twitter, at least not publicly. Notably, just two weeks after Smith wrote his Trump-Russia collusion document, he tried to open a line of discussion with Vincent Tan, whom he appeared to believe was a hacker. But Tam has publicly replied and stated that “I have not had any further interactions with @PTRSIH other than that one public tweet. He most likely found me via a Blackhat presentation that I did last year. There were no DMs. Nothing else.”

In any case there’s no way to ask Peter Smith what he wanted from any of the above people, because he dropped dead of unknown causes right after the Wall Street Journal spoke with him.