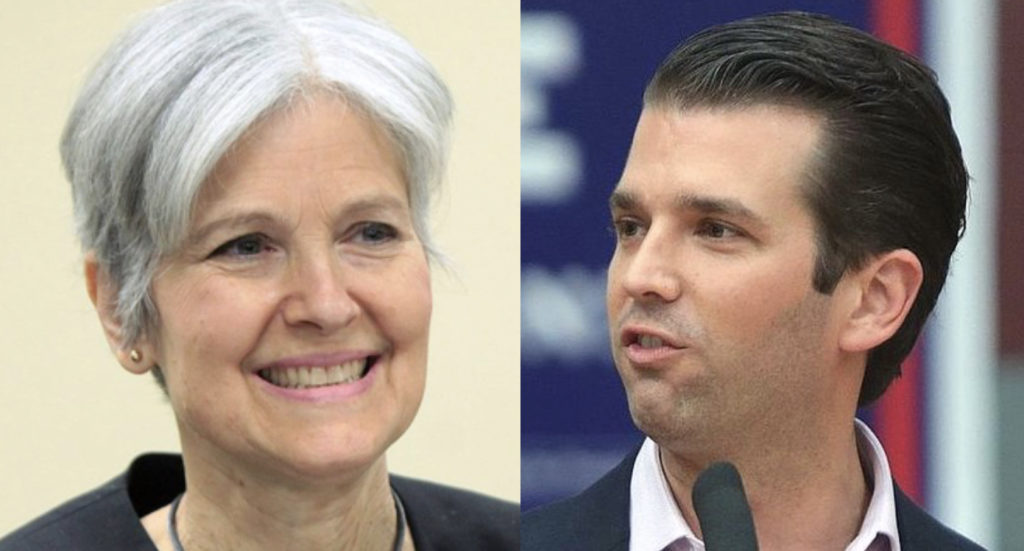 The Senate Judiciary Committee has sent a letter to Donald Trump Jr. officially asking him to testify in public hearings next week, and to turn over all of his relevant documents and communications. The letter names several specific people that he may have communicated with. They’re Trump campaign advisers, Trump family associates, and prominent Russian figures. But right in the middle of the demand list is the name Jill Stein. Wait, what?

That’s right, the Senate Judiciary is now demanding to see Donald Trump Jr.’s communications with former Green Party presidential candidate Jill Stein. She’s right there on the list between Michael Flynn and Michael Cohen. No specific reason is given as to why the committee wants Trump Jr. to turn over his communications with Stein, or why it thinks he communicated with Stein. But this may be a bombshell, because it strongly points to the committee – which has access to classified evidence – knowing something about Stein that we don’t.

All that’s publicly known about Jill Stein’s involvement is that she shared a dinner table with Vladimir Putin and Michael Flynn at Russia Today banquet in Moscow in late 2015. Palmer Report called on Stein back in February to come forward as a material witness (link). The photograph of the three of them at the dinner table has long been social media conspiracy fodder, but aside from that photo, there has never been any evidence that Stein was involved in the Trump-Russia plot to rig the election. And the inclusion of her name in this letter doesn’t mean she’s being accused of any crime. But the Senate Judiciary Committee sure seems to know something that we don’t.

You can find Jill Stein’s name right here on page two of the letter that the committee sent to Donald Trump Jr. (link), but the letter contains no further clues as to why the Senate seems to believe Trump Jr. and Stein may have been communicating. Jill Stein has not yet made any public statement about the inclusion of her name in the Senate letter.