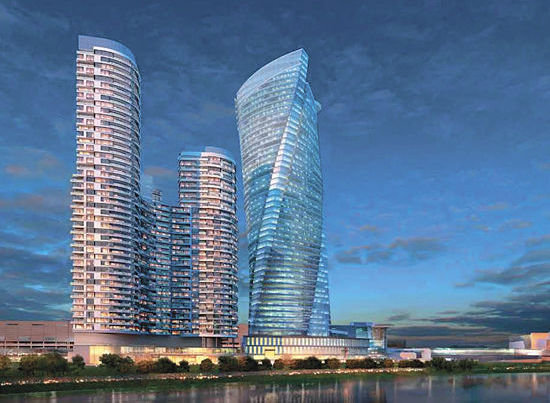 Even as Donald Trump and his associates try to downplay this week’s revelation that they were trying to build Trump Tower Moscow during the 2016 election, details are surfacing which demonstrate just how advanced and specific those plans were. The project has roots in Trump’s 2013 visit to Moscow, and Russian media at the time reveals that it had everything from a location to a site plan to a financier. Remarkably, that financier was the same guy who organized Donald Trump Jr’s meeting with the Russian government during the election.

The evidence lies in a Russian language news article published on the website of major Moscow newspaper mk.ru (link), which was uncovered by political insider Scott Dworkin and political journalist Grant Stern (link). When the Russian article is translated into English by running it through Google Translate, it’s revealed that its title is “Donald Trump will insert his tower in the ‘City’ behind the Moscow Ring Road.” But there’s a lot more to it.

The article goes on to spell out just how detailed the plans were. There was a concept design of the multipronged tower itself, along with a site plan showing precisely where the complex would be located along the river. Moreover it makes clear that the Crocus Group was planning to develop Trump Tower Moscow. Crocus Group belongs to Russian oligarch Aras Agalarov. If that name sounds familiar, it’s because he and his son helped organize the summer 2016 meeting in which Kremlin reps promised to give election-altering information to Donald Trump Jr.

As Palmer Report reported earlier, Donald Trump’s own tweet from 2013 helps to confirm that Trump and Agalarov were indeed planning to build Trump Tower Moscow together. Now you have to ask yourself if it’s a coincidence that Agalarov went on to set up Trump Jr’s election collusion meeting with the Kremlin while he and Trump Sr were trying to build that tower in Moscow.

← Donald Trump sent hidden tweet about Trump Tower Moscow to organizer of Trump Jr’s Russia meetingDonald Trump tries to get it right for once, still blows it →
Leave a Comment