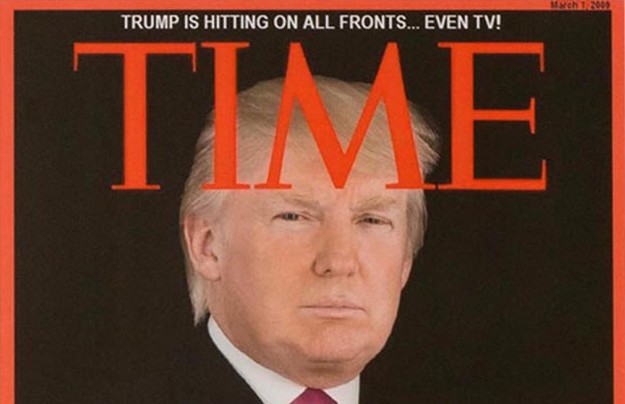 Months ago, Donald Trump was caught incorrectly bragging that he’s been on the cover of Time Magazine more times than quarterback Tom Brady. Now it turns out Trump hasn’t just been lying about the matter, but instead taking things much further. Trump’s golf courses have been displaying fake Time Magazine covers with Donald Trump on it – which has now become a surreal controversy.

The issue first came to light when recent Pulitzer Prize winner David Fahrenthold published an article in the Washington Post (link) which revealed that the circa-2009 Time Magazine cover displayed at Trump’s golf courses is in fact a fake. Trump wasn’t on the cover of Time at any point in 2009. Instead, Trump’s people appear to have simply invented the cover out of thin air, complete with headlines that praise him in absurd fashion.

Upon hearing of the controversy, Time Magazine initially blew it off, but then decided to demand that Donald Trump take down the fake magazine covers (link). It would be one thing for people to make fake Time Magazine covers of themselves for personal fun, and display it in their own home. But when you put it on display at your place of business with the intention of deceiving customers, it becomes a fraudulent matter. Even more oddly, the fake cover is comically unprofessional in its construction.

For instance Fahrenthold has since revealed that “the barcode on Donald Trump’s phony Time cover is actually barcode for software that lets you be a karaoke DJ.” (link). This also raises the question of whether Trump even knows the magazine cover is fake. Did his staff create this and perhaps other fake magazine covers to boost his ego? Is this why Trump keeps insisting he’s been on the cover of Time Magazine more times than he actually has been?

← Sarah Huckabee Sanders keeps getting worse at trying to sell Donald Trump’s liesDonald Trump’s brand is so toxic, a major hotel has stopped licensing the “Trump” name →
Leave a Comment