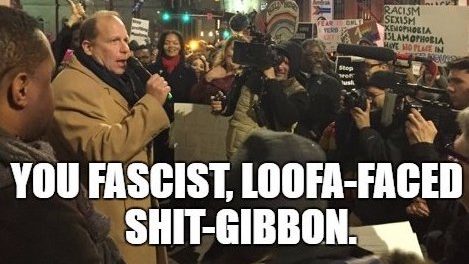 Who is Daylin Leach? Unless you hail from a certain region of Pennsylvania, you may not have known the answer to that when the week began. But after Donald Trump sent up red flags by opening threatening to “destroy” the career of a State Senator in Texas with whom he disagreed politically, it was another State Senator who stepped up to defend his counterpart in bombastic fashion. And in the past day, Senator Leach has seen his national popularity explode in measurable fashion.

Pennsylvania State Senator Daylin Leach flatly declared the following on his Twitter account while defending his Texas counterpart: “Hey @realDonaldTrump I oppose civil asset forfeiture too! Why don’t you try to destroy my career you fascist, loofa-faced, shit-gibbon!” That sent the internet in a flurry as it attempted to determine what some of those words even meant, even as the phrase “shit-gibbon” quickly entered mainstream parlance.

While not popularized until now, the term “shit gibbon” has been around for some time – and it’s been used in Trump’s direction before. Urban Dictionary posted a definition around eight months ago of “General insult….moron, idiot, Donald Trump in particular.” We’re not sure what “loofa” means, but we think he may have been referring to these things. Leach himself joked that a shit-gibbon is “like a cockwomble, only less appealing.” But whatever loofa-faced shit-gibbon means, Leach has suddenly become a national political figure since blasting out those words.

During the past day, @daylinleach has gone from around five thousand Twitter followers to now twenty-six thousand at the time of the publication of this article (likely more by the time you’re reading this). People have turned his insult of Donald Trump into memes, and into a battle cry. If Trump is the Insulter-in-Chief, then Daylin Leach has helped make it okay to insult him back without fear of reprisal. Trump may be in the White House, but after all, he’s just a shit-gibbon in the White House. photo: Steve Hoenstine