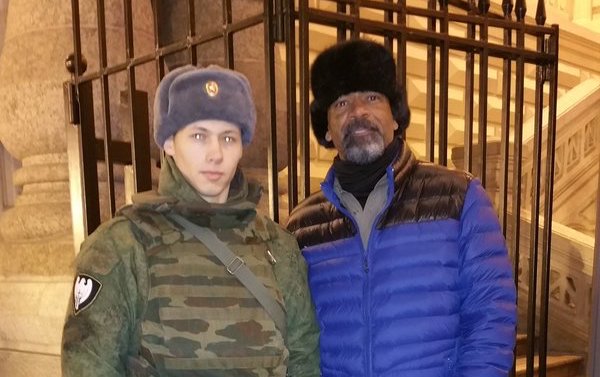 Palmer Report has previously reported that Milwaukee County Sheriff David A. Clarke, a prominent Donald Trump campaign surrogate, had curiously turned up in Moscow in December 2015. Clarke made no real effort to hide the trip, even tweeting a photo of himself with a Russian guard. Trump adviser Michael Flynn and third party presidential candidate Jill Stein were also simultaneously in Moscow. And now the House Intelligence Committee has begun asking why.

Officially, Sheriff Clarke went to Moscow on behalf of a group called The Right to Bear Arms. He ended up meeting with Russian Deputy Prime Minister Dmitry Rogozin. But that doesn’t add up , because Rogozin was on a U.S. sanctions list and couldn’t have legally done business with the gun group. This means that yet another Donald Trump campaign figure met with a Russian government representative for reasons can’t easily be explained away.

The House Intel Committee may also want to take a look at why David Clarke, Michael Flynn, and Jill Stein were all in Moscow simultaneously. Flynn has since resigned as National Security Adviser after getting caught lying about his contact with the Russian government. The New York Daily News has also reported that Flynn was paid $40,000 to be there. And as Palmer Report has previously pointed out, Stein sat at the same dinner table as Flynn and Vladimir Putin, making her a material witness to whatever they discussed.

← Sean Spicer has another Twitter accident, tweets private message about how tough things areJeff Sessions now admits he met twice with Russian Ambassador. But there were at least three meetings. →
Posting....
Scroll To Top