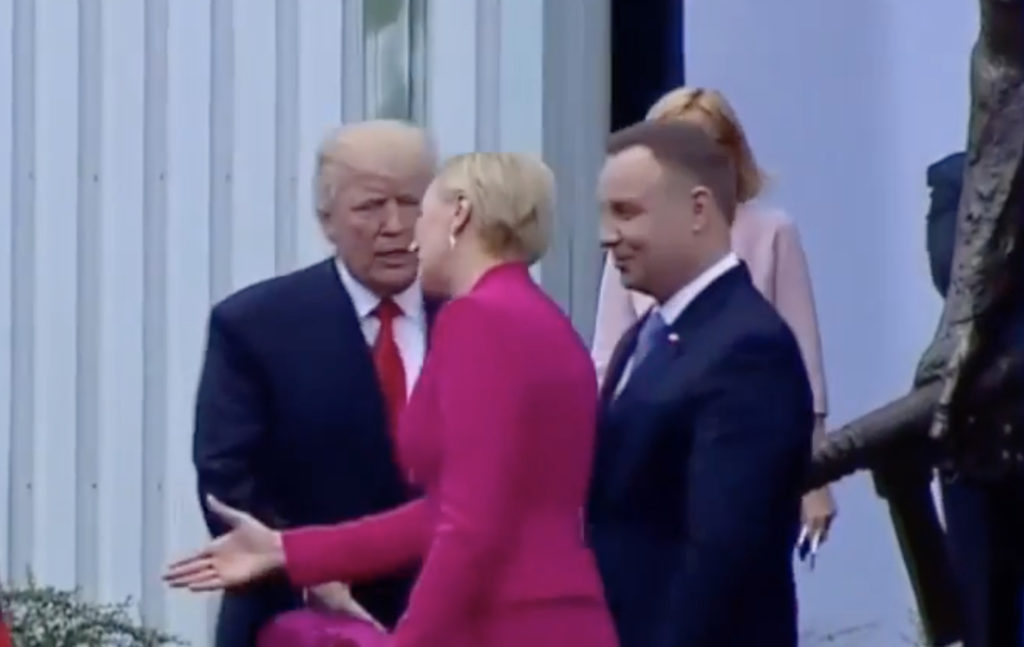 Poland, which has been taken over by the same kind of xenophobic “nationalist” extremism that Donald Trump stands for, should have been the one easy day for him on what will otherwise be an extremely difficult and hostile overseas trip. Sure enough, Polish extremists turned out in support of Trump when he made a joint appearance with the President of Poland. But it turns out Trump even found a way to screw that up.

Donald Trump and Melania Trump appeared on stage together with Polish President Andrzej Duda and First Lady Agata Kornhauser-Duda. Donald shook hands with Andrzej, and then stuck out his arm to shake hands with Agata. But instead she zoomed right past Donald’s outstretched hand and shook Melania’s hand instead. That left Donald standing there staring at Agata in blankly confused fashion – which by now has become his most common facial expression in public.

There have been a number of incorrect reports out there claiming that the First Lady of Poland refused to shake Donald Trump’s hand, which is incorrect. After she initially snubbed him in favor of Melania, she did then circle back and accept his handshake. Watch the video below:

While Donald Trump did get the rare warm overseas reception in Poland that he’d been hoping for, he nonetheless managed to end up looking foolish. In addition to everything else that’s wrong with Trump, he doesn’t seem to know how something as simple as a handshake works, which he’s demonstrated time and again. As Trump moves on from Poland to visit other U.S. allies, the public’s reception toward him will turn much more hated – there will be protesters, booing, you name it – raising the question of how badly he’ll screw up his diplomatic interactions under that rising pressure. If you’re a regular reader, feel free to support Palmer Report