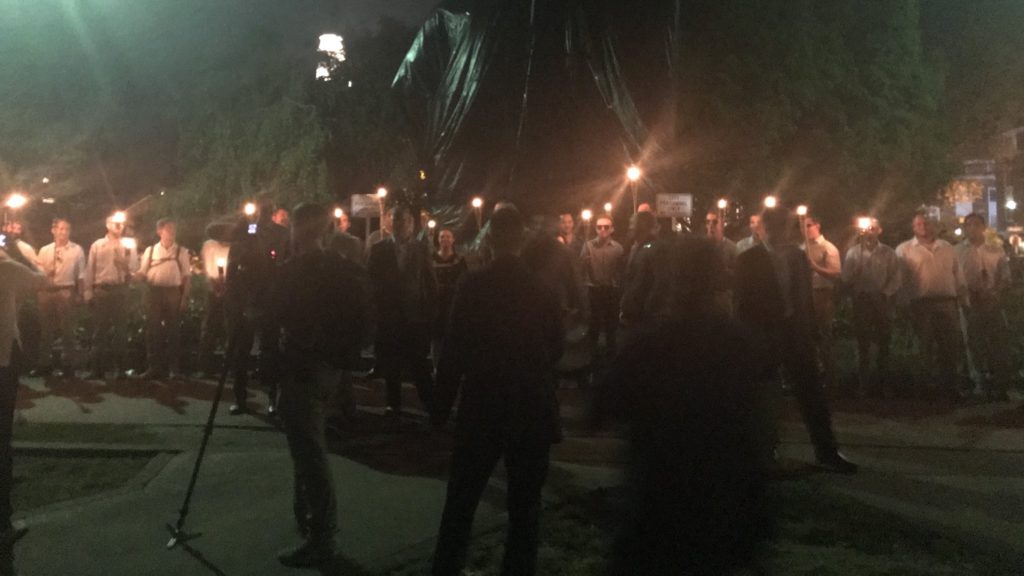 At 7:53pm eastern time, Matt Talhelm of NBC News local affiliate NBC 29 tweeted the following: “HAPPENING NOW: @RichardBSpencer & white nationalist supporters are back with their torches in front of Lee statue in #Charlottesville.” (link). At 7:57pm he added “White nationalists now chanting – ‘We will be back’. About 3 dozen supporters in Emancipation Park. Plenty of police on standby in park.”

Finally, at 8:02pm, he tweeted “UPDATE: After short torchlit protest in front of the tarp-covered Lee monument in #Charlottesville, white nationalists have left the park.” It’s not immediately clear if “We will be back” was a threat that they’ll return tonight, or at another unspecified time down the road. Either way, the nightmare of the original Charlottesville torchlit march and terrorist attack is now playing out again in nearly exact fashion, if apparently on a smaller scale.

Fortunately, there have been no reports that anyone has been injured. One can only hope that Spencer and his white supremacist goons didn’t mean it when they vowed tonight that they’ll be doing this yet again. Meanwhile, even though Donald Trump has tweeted twelve times thus far today, he has yet to tweet a word about this latest Charlottesville incident, as of the time of publication of this article. With this being a Saturday night, it’s unclear how much coverage the mainstream media will end up giving tonight’s Nazi and white supremacist march. photo courtesy NBC29 Charlottesville

← Robert Mueller zeroes in on Donald Trump and Donald Trump JrDid Facebook partner with Kaspersky Lab to push hacked Russian malware software on its users during the election? →
Posting....
Scroll To Top