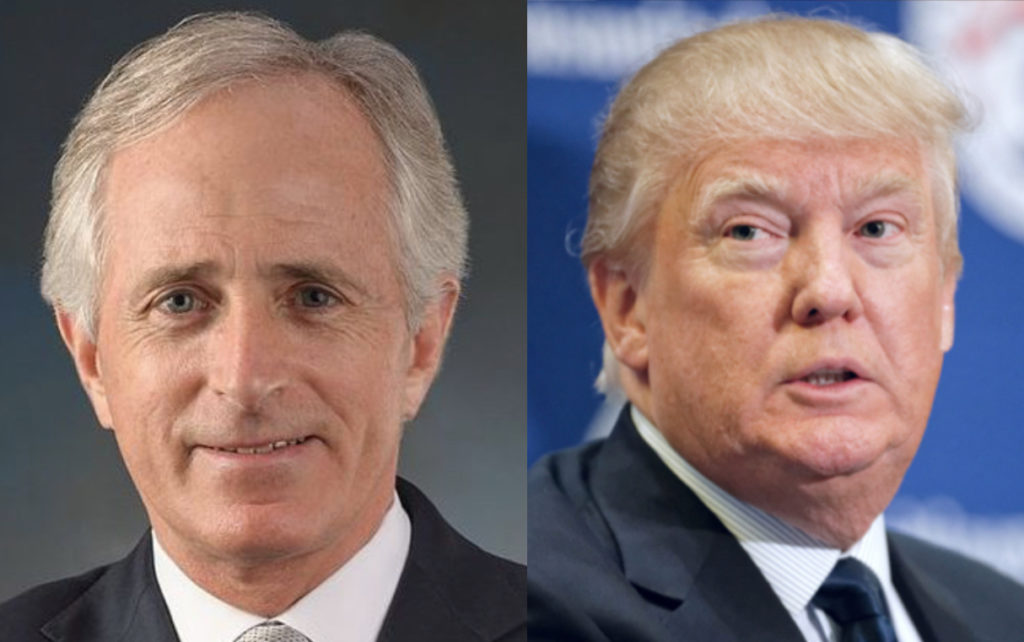 Republican Senator Bob Corker has so thoroughly had it with Donald Trump’s demented antics, he’s willing to risk derailing his own party’s tax cuts for the wealthy in order to march Trump toward the door. Corker grabbed a CNN reporter’s microphone this morning and announced that he regrets having supported Trump during the election, accused Trump of being a consistent liar, and stated that Trump wisas not a good role model for children. Let’s just say that Trump didn’t take it well.

Trump promptly went berserk on Twitter, posting “Bob Corker, who helped President O give us the bad Iran Deal & couldn’t get elected dog catcher in Tennessee, is now fighting Tax Cuts. Corker dropped out of the race in Tennesse when I refused to endorse him, and now is only negative on anything Trump. Look at his record!” First of all, he spelled “Tennessee” two different ways in the same tweet. On top of it, this is a lie, and a weird one at that. Trump encouraged Corker to run for reelection, and promised to endorse him, before Corker decided to retire. Dog catcher? Really? Then it got uglier.

Trump continued: “Isn’t it sad that lightweight Senator Bob Corker, who couldn’t get re-elected in the Great State of Tennessee, will now fight Tax Cuts plus!” Again, this is another lie, as Corker likely could have gotten reelected easily. Trump went on: “Sen. Corker is the incompetent head of the Foreign Relations Committee, & look how poorly the U.S. has done. He doesn’t have a clue as the entire World WAS laughing and taking advantage of us. People like liddle’ Bob Corker have set the U.S. way back. Now we move forward!”

Donald Trump has it wrong yet again here, as now that he’s taken office, America’s enemies are laughing, and America’s allies are worried. Also, this is the second time Trump has used the imaginary word “liddle” followed by an apostrophe, and no one is sure what he’s trying to say. Trump then randomly tweeted “Stock Market just hit another record high! Jobs looking very good.” This was surreal, considering that he lost 33,000 jobs last month. No wonder he’s tweeting about dog catchers.