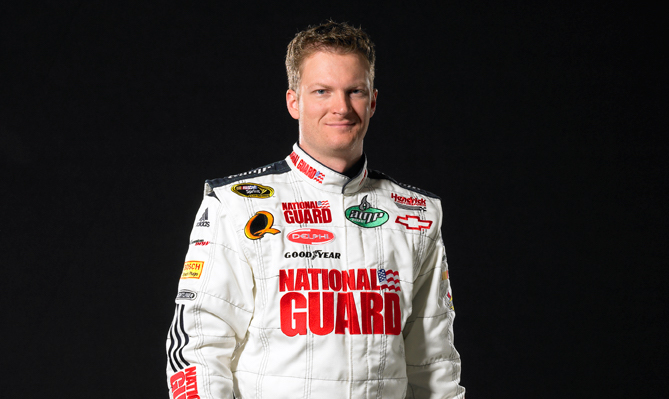 Now that a reality show host is occupying the office of President of the United States, it falls to other public figures to fight back against his racist agenda. Now that Donald Trump’s racism has extended to attacking black athletes who protest against his racism, numerous sports stars are now pushing back against him. That includes a white star in a mostly white and very conservative sport: Dale Earnhardt Jr.

This morning Trump continued his rant against black NFL players who protest against racism, and he called for an all-out boycott of the NFL in response. He then praised the one sport that’s not allowing any protests. Trump tweeted “So proud of NASCAR and its supporters and fans. They won’t put up with disrespecting our Country or our Flag – they said it loud and clear!” This showed a remarkable level of tone deafness, considering that nearly all NASCAR drivers are white, as are most of its fans. Until recently, NASCAR even allowed the Confederate flag, a de facto symbol of racism and slavery, to be flown at its races. But now one of its own biggest names is pushing back.

Dale Earnhardt Jr responded to Donald Trump’s NASCAR tweet with the following response: “All Americans R granted rights 2 peaceful protests
Those who make peaceful revolution impossible will make violent revolution inevitable – JFK” (link). Not only was Dale Jr showing solidarity with the NFL players who protested, he also took a stand against NASCAR owners – and it was a clear shot at Trump himself.

Donald Trump’s foray into politics has been defined by his racist stances from day one. But now that he’s reached the point where he simply spends his days picking fights with famous black sports figures to try to fire up his own racist base, he’s facing increasing pushback from white sports figures as well.