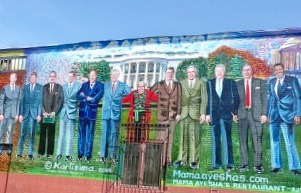 Many Americans don’t consider Donald Trump to legitimately be president due to the fact that Russia rigged the election on his behalf and he still lost by three million votes. And now it turns out a famous Washington DC landmark won’t be including Trump as a president either. The mural depicting every United States President since Dwight Eisenhower will be leaving Trump out of the picture, literally.

Mama Ayesha’s restaurant in Washington DC is famous for its mural of the restaurant’s founder standing alongside sixty years worth of Presidents, who have been painted into the picture one by one as they’ve taken office over the years. But Trump will be excluded, according to a report from Mediaite. The restaurant is diplomatically blaming it on not being in the budget. But the real reason seems rather apparent: Mama Ayesha’a is a Middle Eastern restrauant, and Donald Trump is a racist.

This comes amid a widespread number of questions as to whether Donald Trump, an outspoken racist and admitted sexual predator who is Cleary loyal to Russia over the United States based on his own tweets, will be added to various presidential landmarks and attractions that are privately controlled around the nation.

← ‪Donald Trump insists he has inside info on Russian election hacking, won’t tell anyone til Tuesday‬‪Protester against Dakota Access Pipeline hangs from rafters at NFL football game‬ →