White House Press Secretary Sean Spicer is not looking too good this week, and we’re not just talking about that ill fitting suit he wore during his first appearance in the briefing room or the lies that Donald Trump keeps making him tell during his briefings. Instead, Spicer appears to be rattled. Not only has he looked and sounded nervous during his public appearances, he’s apparently forgotten how the internet works. Because twice now he’s tweeted what appears to be his own password.

Sean Spicer rarely posts anything on his official @PressSec account on Twitter, having only tweeted three times in the past four days. And one of those tweets looked like this: 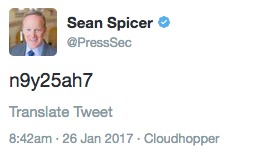 There’s no way to know for 100% sure what “n9y25ah7” is supposed to mean, but it looks precisely like one of those computer generated passwords they give you for security reasons, which mixes letters and numbers in random order. This is, almost certainly, the password for the White House Press Secretary Twitter account — and he typed it into the box for tweets instead of the box for passwords.

Spicer and his boss both need this

.
Spicer quickly deleted it, but not before Mashable managed to screen cap it for posterity, displayed above. Oh and it gets better, because Boing Boing has confirmed it’s the second time Spicer has tweeted his own password, having apparently changed it to something more complex after he mistakenly tweeted the first one.

He’s surely changed it as soon as he realized he had accidentally tweeted it publicly. So there’s no risk of a security breach in posting it here now; surely he’s found an alternative password to go with his alternative facts. But since when does a guy whose job is to control information get so sloppy and haggard that he’s accidentally tweeting his own password for the whole world to see? At this point we’re one step away from Donald Trump accidentally tweeting the nuclear launch codes while he’s attempting to yell at

It suggests Sean Spicer may be every bit as rattled this week as he’s looked to be when he’s been on camera. You probably would be as well, if Donald Trump were demanding that you go out there and lie to the public on his behalf, third world dictator style, every day. It begs the question of whether Spicer is going to last, as Trump hurtles his administration toward Watergate.