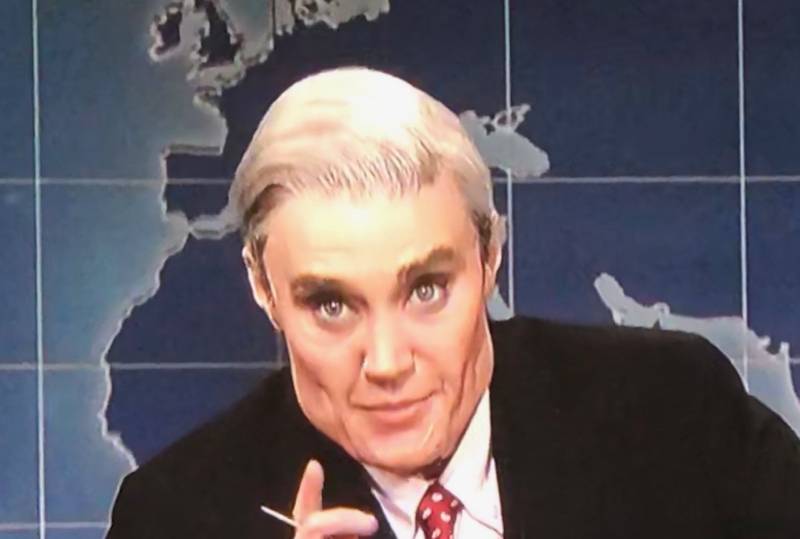 Last night, Saturday Night Live once again featured its Robert Mueller character. If you haven’t yet seen the episode and you’re still planning to watch it, now would be a good time to stop reading this article, as I wouldn’t want to spoil the surprise for you. The fact that Mueller appeared in a sketch isn’t the surprise; it was the clever way in which he was unexpectedly used. If you’re still here, it means you’ve already seen it, and we can talk about what we just watched, and why it may have missed the intended mark.

Kate McKinnon’s portrayal of Robert Mueller last night was brilliant, as usual. I’ve lost track of how many famous political figures she’s now portrayed on SNL. Working Mueller into a sketch about The Bachelor was also a refreshingly unique concept. Cecily Strong’s character accurately represented mainstream Americans everywhere who have been falling in love with their own image of Mueller for the past nine months, as he’s come to represent so much hope when it comes to taking down Donald Trump for his endless crimes. But here’s the thing.

Comedy is at its best when it’s based on truth. The two easiest ways to get there are to take what’s true and exaggerate it for effect, or take what’s widely known to be true and portray it as the opposite for effect. One great example of the latter is when McKinnon portrays Ruth Bader Ginsburg as cartoonishly outspoken, when the real Ginsburg is a fierce but stately Supreme Court justice. We watch it and laugh because we imagine that’s how the real Ginsburg would like to act. The trouble with the SNL version of Mueller last night is that it didn’t check either of the above boxes.

The Robert Mueller character sounded utterly defeated in his goal of making Donald Trump answer for his crimes. He said he didn’t know if he could make obstruction or collusion stick, and that we might be stuck with Trump for the long haul. Wait, where did this come from? This portrayal would make sense if Mueller had just been handed a string of defeats, or if Trump had found an effective strategy for working around him. But that simply hasn’t happened.

In reality, Robert Mueller is utterly destroying Trump. In fact, over the past few weeks, he’s been scoring some of his biggest victories to date. He keeps flipping Trump’s own closest advisers. He’s piling on indictments weekly. He has a grand jury going against nearly everyone in Trump’s inner circle. He’s uncovered such sensitive documents and correspondence between Donald Trump and Russia that the public didn’t know it existed. So what on earth was last night’s hesitant and defeated Mueller portrayal supposed to be based on?

If SNL had been going for a comedic inversion of the real Robert Mueller, they might have painted him as doubting himself even as everyone around him points out how thoroughly he’s winning. If they wanted to lampoon the Bachelor, they might have painted Mueller as having to break the news to someone that even if Trump is ousted and it’s proven that he rigged the election, Hillary Clinton can’t magically be installed in his place. There would have been plenty of ways to approach the Mueller-Bachelor-disappointment sketch that would have rang true; what we saw last night wasn’t one of them.

Instead, last night’s SNL portrayal of Robert Mueller felt like it was written by people who simply haven’t been following the day to day developments in the Trump-Russia investigation, and were basing the sketch on a random guess about where Mueller’s progress might or might not be. The potential trouble is that the average viewer, who probably doesn’t follow the day to day Mueller developments either, will likely have come away from this sketch thinking that Mueller is on the verge of failing.

Good comedy isn’t supposed to leave people disinformed. The average American doesn’t know enough about Robert Mueller or his Trump-Russia investigation as it is. Most people don’t regularly watch cable news. This sketch left them effectively knowing even less about where things stand. If this sketch hadn’t been so fundamentally inaccurate about such a crucial issue, I would have considered it to be hilarious. I can see on social media that plenty of people thought the Mueller sketch was funny, presumably because they didn’t know how inaccurate it was. That’s more or less my problem with it.