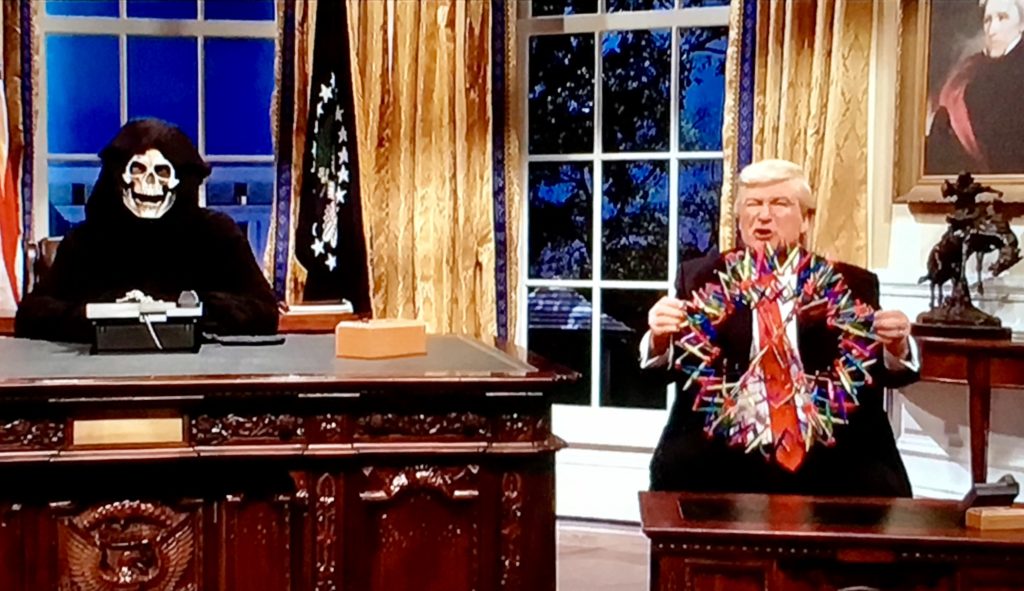 Saturday Night Live wasted no time highlighting what has rapidly become apparent to Americans over the past week: Donald Trump has no idea what he’s doing, and the nation is instead being run by evil white supremacist Steve Bannon. SNL didn’t even bother to try to make up a cast member to look like Bannon, instead dressing him as the Grim Reaper and pulling a clueless Trump’s puppet strings — including baiting him into fights with various world leaders over the phone, none of which ended well.

Bannon first talked a bored Donald Trump into calling up the Prime Minister of Australia and yelling at him for no good reason before hanging up on him, which according to White House insiders, is pretty much happened when the real Trump called the real Malcolm Turnbull this week. Trump also made multiple failed attempts to get the President of Mexico to pay for the wall, made horrible remarks about the Holocaust to an offended Chancellor of Germany, and then called up the dictator of Zimbabwe – who promptly dismissed him as a “little white bitch” and then slammed the phone down on him.

But it was the end of the sketch which may have been the most telling. Once Donald Trump was done screwing around on the phone, he allowed Steve Bannon to have the Oval Office desk, while settling for a tiny desk adjacent to it. Trump then became distracted by a child’s toy, as grim reaper Bannon took his place as head of the White House and delivered the opening “Live from New York” line in a show of power.

Elsewhere on SNL tonight, manic White House press secretary Sean Spicer was portrayed by Melissa McCarthy of all people, who lampooned him as being so angrily out of control that he began hurling his podium at the reporters in the room.