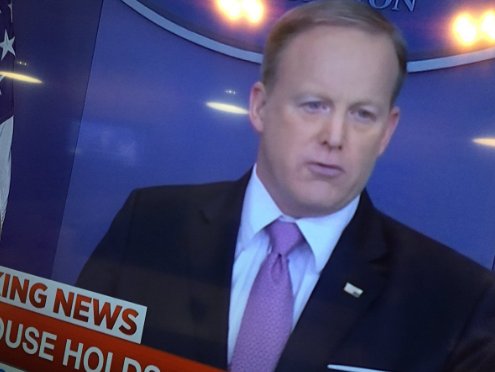 White House Press Secretary Sean Spicer has been having a bad week, a bad month, a bad year. He’s lied about inauguration crowd sized on Donald Trump’s behalf while wearing the wrong sized suit. He’s twice accidentally tweeted his own password. And he’s been lampooned mercilessly on Saturday Night Live by Melissa McCarthy. But today something was different about Spicer during his briefing. Although some things didn’t change.

Sean Spicer began his briefing in highly unimpressive fashion, wearing a United States flag pin on his lapel which he didn’t realize was upside down. That’s a customary form of distress signal for American vessels, leading the internet to mockingly accuse him of signaling that he wanted to be rescued from the sinking Trump administration. But then he seemed to settle in, even making a rare joke.

After protesting that he didn’t think a particular reporter’s question was fair, Spicer offered a bit of defensiveness before falling back on humor. “Don’t make me make the podium move,” he quipped in obvious reference to the signature move of McCarthy’s SNL version of him, who deals with frustration by ramming the podium into reporters. But Spicer’s bumbling upside down flag pin got the most attention. photo: @Impeach_D_Trump | Twitter

← Ukraine probes Trump manager Paul Manafort after his daughter accuses him of killing peopleTurkey has asked for its money back from former Donald Trump adviser Michael Flynn →
Posting....
Scroll To Top