White House Press Secretary Sean Spicer has had something of a rough week, both in the real world and on social media. His appearances in the briefing room have been marked by nervous lies and ill fitting clothing. And least twice now, he’s accidentally tweeted his own Twitter password for all to see. But tonight he did something which may have fully put him into caricature territory: he inexplicably tweeted a humiliating video about himself from satire site The Onion.

It’s not yet entirely clear what happened, but Sean Spicer’s Onion tweet — which he may have gotten around to deleting by the time you’re reading this — has been screen capped by us for posterity: 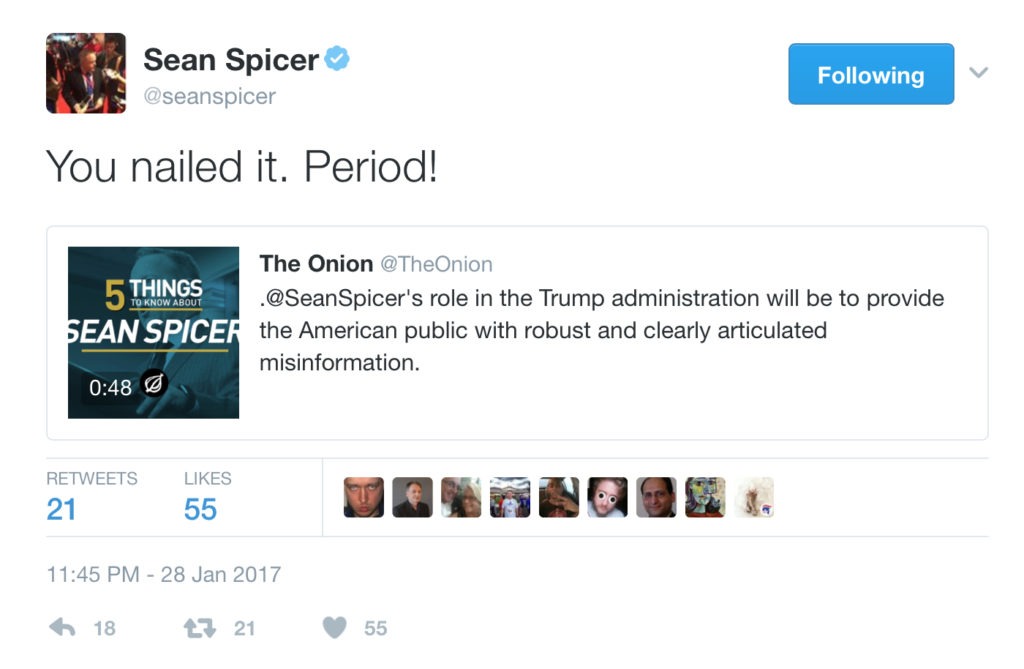 That’s right, Spicer posted a link titled “@SeanSpicer’s role in the Trump administration will be to provide the American public with robust and clearly articulated misinformation” and then he added “You nailed it. Period!” What in the mother of all social media snafus just happened?

There are at least a few possibilities here. One is that, with Sean Spicer having unwittingly handed out his own Twitter password so many times this week, someone has indeed gotten into his account and tweeted this on his account in order to embarrass him. Another is that, after a terrible first week on the job which has turned him into a punchline, Spicer was making an awkward attempt at going along with the jokes about him.

And then there’s the possibility that the increasingly haggard Sean Spicer has simply cracked. In any case, here’s The Onion video that Spicer inexplicably tweeted.