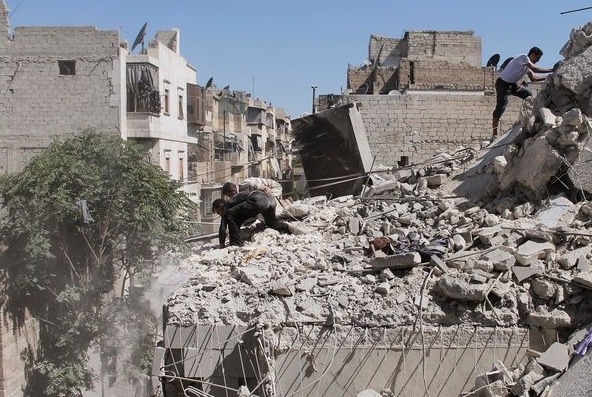 For months, the world has been focused on the refugee crisis in the war torn city of Aleppo. The Syrian civil war has battered the city to the point that nearly everyone living in it has become a refugee, with no real way to survive there and nowhere to go, even as other nations struggle to find a humanitarian solution. But almost immediately after Donald Trump was declared the winner of the 2016 election, he spoke with Russian President Vladimir Putin. And while we don’t know what was said, Russia has since basically destroyed Aleppo entirely.

We know that Trump spoke with Putin immediately after the election, because he announced it on his Twitter account. In fact he placed Russia first in his list of nations whose foreign leaders he’s spoken with. Since that phone call between Trump and Putin, Russia has begun ruthlessly bombing what’s left of Aleppo without regard for human life. In fact the last remaining hospital in the city, perhaps the final hope for of survival for the refugees there, has just been blown up by Russian airstrikes, in what can only be described as an act of genocide.

Whatever Donald Trump said to Vladimir Putin in their phone call after the election, Putin took it as a clear signal that he had Trump’s blessing to go ahead and destroy what was left of Aleppo, human lives be damned. Putin’s cold blooded strategy is easily understood. He’s willing to wipe out anyone and anything in Syria that he believes will increase the odds that Bashar al-Assad, the Syrian dictator he controls, will be able to remain in power – and that’s because Assad ensures that Russia can get Syrian oil on the cheap.

But Trump’s motivation for giving Vladimir Putin the green light to go ahead and finish off Aleppo is less clear. Are they trading favors? Is Trump truly the bought and paid for Russian puppet that so many have long believed? Is Trump simply too clueless about foreign policy to care? We don’t know what goes on inside his head. But regardless of his motivations, Donald Trump gave Vladimir Putin his blessing to go ahead and commit an act of genocide. And when it comes time to impeach Trump for crimes in high office, his complicity in Putin’s genocide should be first on the list.