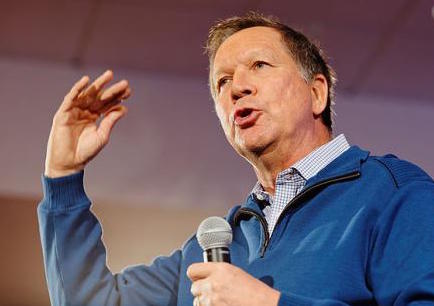 Even as the major media outlets continue to largely ignore the very real recount effort which could reassign anywhere from 10 to 46 of Donald Trump’ electoral votes to Hillary Clinton, some of those same news outlets have become pushing the idea that John Kasich is somehow about to become President. While the odds of the Electoral College electing Clinton over Trump are fairly small, the odds of it electing John Kasich are essentially zero. It comes down to basic math.

Donald Trump enters the Electoral College with 306 votes assigned to him. Hillary Clinton enters with 232 votes assigned to her. John Kasich enters with zero votes assigned to him. Even though one of Trump’s electors from Texas is openly talking about trying to convince his colleagues to pick someone like Kasich, he would need to find 269 other people to join him (out of 538) who were all willing to switch their votes to Kasich. Moreover, he’d have to find a way to get all 269 of them to agree to vote for the same candidate, whereas some of them might prefer someone like Mitt Romney over Kasich.

Similarly, there would be no chance of the Electoral College electing someone like Bernie Sanders or Joe Biden as President. The idea of a candidate entering the Electoral College with zero votes, and emerging with 270 votes, is simply a fantasy. Instead, there are three actual scenarios in play:

– The first scenario is that Donald Trump manages to hang onto 270 or more of his 306 electoral votes, and he’s elected President. This is the most straightforward scenario, and frankly, the most likely. While we’ve seen far more evidence in 2016 of electors being willing to switch their votes than in any prior modern election, it’s just not something they usually do. In fact some would face legal penalties in their home states, and could end up needing attorneys.

– The second scenario is that 38 or more of Trump’s electors decide to flip to Hillary Clinton, and she’s elected President. This scenario is also straightforward, but it seems far less likely. If you want to gauge things, ask yourself what the odds are of 38 out of the 306 Trump delegates – who are all Republicans from red states – all switching to Hillary, the Democratic nominee. If Hillary wins one or more of the recount states, then she would need fewer than 38 electors to flip to her, thus increasing her odds. For instance if she wins the Michigan recount, then only 22 of Trump’s electors would need to switch to her.

– The third scenario is that the Electoral College screws around and nullifies itself. If 37 or more Trump delegates decide to cast no vote, or to waste their vote on Kasich, then next thing you know, neither Trump nor Hillary will end up with 270 electoral votes. In such case the House of Representatives would pick the next President. They would certainly pick a Republican. My guess is they would simply rubber stamp Trump and take their chances with him, rather than handing it to someone like Mike Pence, which would be historically controversial. But the final result of this scenario is anyone’s guess.