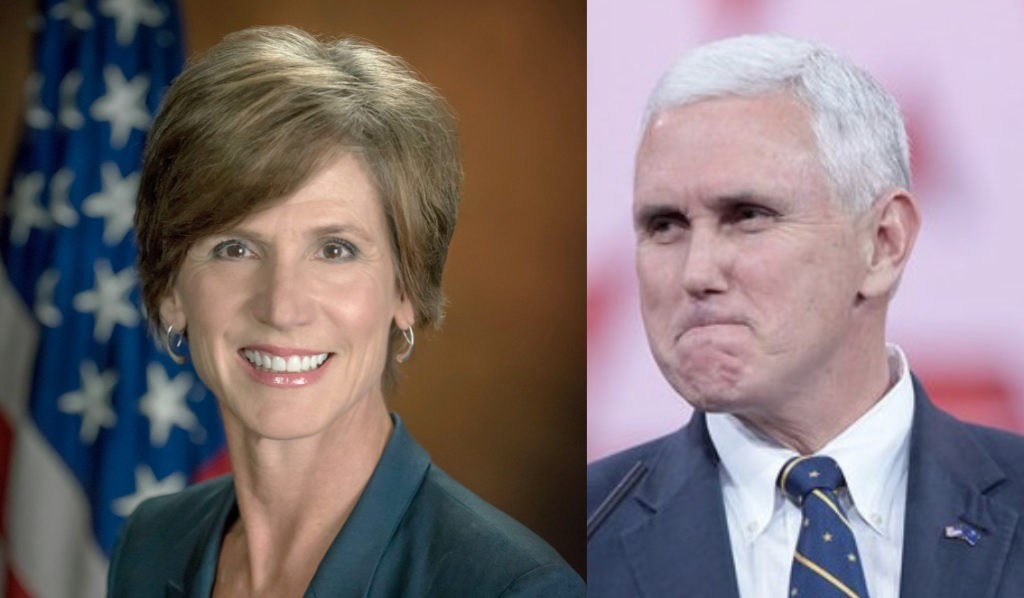 During her congressional testimony today, former acting Attorney General Sally Yates went out of her way to make clear that she had been giving vice president Mike Pence the benefit of the doubt all along. She stated that she warned the Trump White House about Michael Flynn’s Russian connections in part because she wanted to prevent Pence from unwittingly repeating Flynn’s lies in public. But read deeper into it.

It’s already well established that Democratic Congressman Elijah Cummings sent a letter to the office of then vice president-elect Mike Pence back in mid November, spelling out how Michael Flynn was on the take from a foreign government (source: U.S. House website). That’s led us to postulate that the Democrats may have been trying to set up Pence so that if he ignored the letter, it could later be demonstrated that Pence was as knee deep in the Russia scandal as anyone else on Trump’s team (link). Let’s say Trump resigns under pressure of scandal. Then the Democrats would have an instant scandal on Pence.

For her part, Sally Yates had to have already been aware of Cummings’ November letter to Pence by the time she came across separate evidence in January that Flynn was dirty on Russia. So even tough Yates says she warned the White House about Flynn in order to protect Pence from any further unwitting culpability, she had to have already known that Pence was willfully complicit.

So why would Yates have gone to the Trump White House to warn them about Flynn in order to protect Pence, if she already knew Pence was in on it? It may have been a way of helping further demonstrate Pence’s culpability. Pence failed to fire Flynn after learning of what Yates had to say, demonstrating that Pence hadn’t actually been lied to by Flynn; he wasn’t nudged out until after it all leaked to the media. So was Sally Yates helping the Democrats set up Mike Pence for a fall all along? We may never know for sure. Help fund Palmer Report