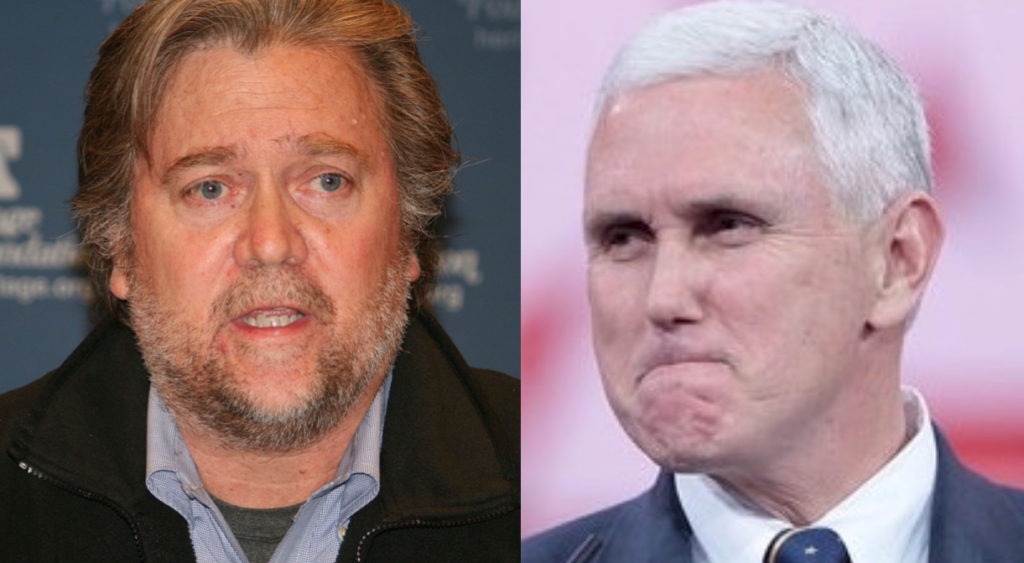 It’s never been clear what role, if any, Mike Pence may have played in the Donald Trump campaign’s collusion with Russia to rig the 2016 election. But now that Pence has been publicly dragged into the scandal and found himself placed squarely in the middle of National Security Adviser Michael Flynn’s demise, Pence is now using the calamity to publicly call for the demise of an unnamed Trump advisor who is almost surely Steve Bannon.

Mike Pence’s position is that Michael Flynn lied to him about the nature of his Russian phone calls, prompting Pence to repeat those lies in a television interview in January. Even after former acting Attorney General Sally Yates informed the Trump White House near the end of January that Flynn was a likely blackmail target due to his Russian collusion, Donald Turmp kept that information from Pence for weeks — and fired Yates partly to cover his tracks.

Pence claims he didn’t learn about Flynn’s treachery until he saw it in the headlines. And now that Flynn has resigned in disgrace, Pence is now demanding to know which White House aide kept the relevant information from him. But this information went from Sally Yates to the White House counsel to Donald Trump. And at this point Trump only appears to still trust Steve Bannon. So it’s nearly a given that Trump shared this information with Bannon, who then advised him to keep it from Pence. And Pence knows this, so he knows whom he’s targeting on this.

So with Mike Pence now calling for the head of whichever White House aide is responsible for having kept the information from him, as reported on-air by CNN today, it’s fairly clear that Pence is trying to pin the Flynn-Russia flap on Steve Bannon for the purpose of getting him fired. It’s not clear if Pence has the muscle to push Trump into dumping Bannon – but Pence is nonetheless trying. This increasingly suggests that Pence is trying become the beneficiary of Trump’s inevitable impeachment.

← Roger Stone, about to go down for conspiring with Russia, throws Donald Trump under the busAttorney General Jeff Sessions just became a material witness in Donald Trump – Russia scandal →
Leave a Comment