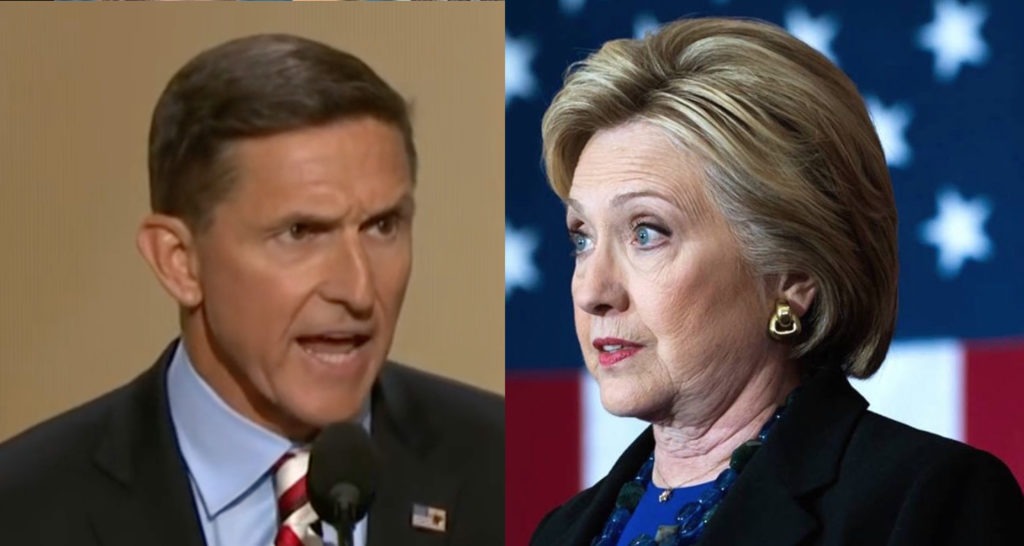 Those who only pay casual attention to American politics are waking up this morning and learning of the resignation of Donald Trump’s National Security Advisor Michael Flynn, after he was exposed as a Russian traitor, and trying to recall just who he is. Here’s a hint: at the Republican National Convention, Flynn was the guy who popularized the “Lock Her Up” chant about Hillary Clinton by screaming it in unhinged fashion. Oh the irony.

Michael Flynn’s resignation last night puts an exclamation point on what the intelligence community had confirmed four days ago, and what anyone paying close attention had known for months. Flynn was regularly calling up the Russian ambassador, going back to well before election day, in order to coordinate things between Trump and Vladimir Putin. Trump will ostensibly continue to claim he didn’t know what Flynn was doing, but Trump has already admitted complicity, and it seems only a matter of time before Trump goes down with Flynn.

And that’s remarkable, considering that these two traitors – Trump and Flynn – led the charge in falsely accusing Hillary Clinton of criminal behavior. Even more remarkably, Michael Flynn was already known to have purposely leaked classified information to a hostile foreign government at the time he falsely accused Hillary of having exposed classified information via her email. Flynn gave classified intel to Pakistan against orders, because he believed it would help in the fight against terrorism (it didn’t). And he was demoted for it, too.

But then the Defense Intelligence Agency gave Michael Flynn a second chance by giving him a job, until he turned out to be too unstable, and was fired in 2014. Flynn was then hired by Russia Today, an English-language propaganda television station funded by Putin and the Russian government. Incredibly, Donald Trump then decided it would be a good idea to bring Flynn on board with his campaign. And this was the criminal traitor who led the idiotic “Lock Her Up” chant about Hillary Clinton.

By the way, the FBI ended up fully clearing Hillary Clinton over her email twice; she never did anything wrong. But Michael Flynn had already purposely leaked classified intel to the enemy at the time he falsely accused Hillary of mishandling classified intel. And Flynn had already officially been in the employ of Vladimir Putin. Those who voted for Trump because they mistakenly thought Hillary was a “criminal” unwittingly handed the United States over to Russia. Now the only questions are whether Flynn goes to prison — Lock Him Up indeed — and how quickly Trump is impeached.