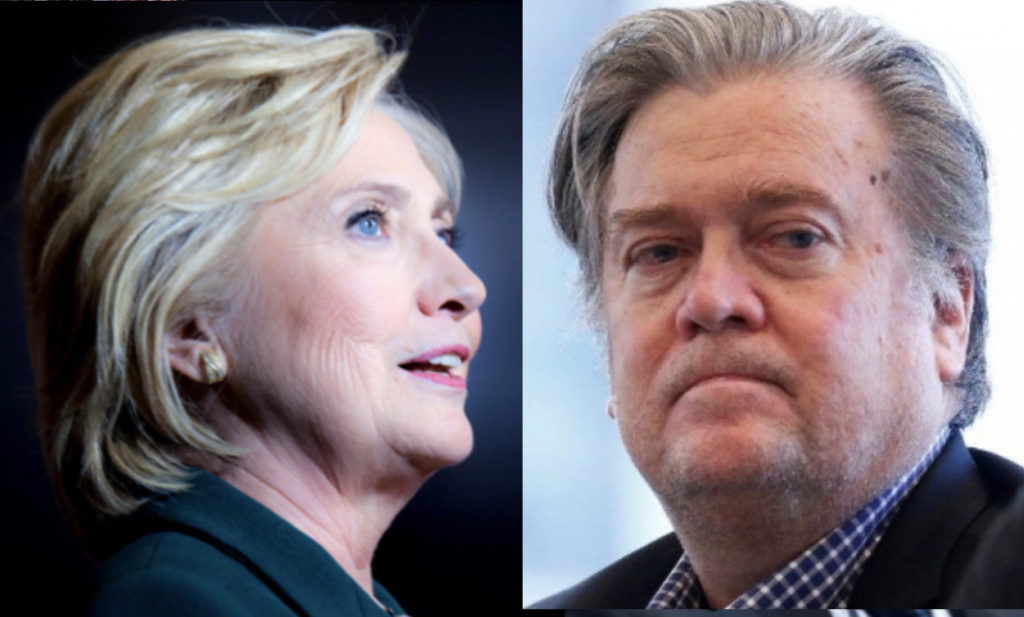 Steve Bannon, fresh off getting fired by Donald Trump, was given a prime interview slot on 60 Minutes on Sunday night. Rather than showing an ounce of humility or circumspection for having been dumb enough to somehow get himself fired by Trump, Bannon instead used the interview as a weird sort of victory lap. His most curious moment may have come when he announced that Hillary Clinton isn’t very bright. Let’s talk about this one.

Bannon is no dummy himself. He was probably the smartest and savviest person in Donald Trump’s stable of otherwise startlingly dumb advisers. No matter how low your opinion of Bannon as a person may be, he has some intellect. The trouble for him is that he seems to think he has twice as much as he really does. After all, he’s the guy who was dumb enough to lease a house in his own name for his ex and her drug dealing new boyfriend, which resulted in the infamous acid bathtub incident. But Bannon has also done some profoundly dumb things in his time with Trump.

For one thing, officially taking over the Trump campaign was a major mistake for Steve Bannon. He’d been unofficially running it from the start. But by officially taking a leadership position halfway through the general election, he thrust himself personally into the spotlight. Up to this point he’d managed to lay low for years, pulling strings behind the scenes, turning Breitbart into a powerhouse alt-crazy propaganda site, all while keeping himself out of it. He was so successfully off the grid that at the time he was named the CEO of the Trump campaign, it was difficult to find more than a handful of photos of him online.

Now he’s a national punchline, and for what? Whatever Steve Bannon managed to accomplish by officially taking over the Donald Trump campaign, in terms of getting Trump illegitimately elected or boosting his own site Breitbart, he could have done the same thing from behind the scenes. All he did in hindsight was turn a bright white spotlight on himself. In so doing he painted himself as a prime suspect in the election collusion scheme with Russia, because now everyone knows he was pulling the strings at Cambridge Analytica, which is suspected of having been working with voter data stolen by the Russians. Robert Mueller knows precisely what to do with that.

Perhaps most importantly, Steve Bannon was dumb enough to get himself fired from his White House Chief Strategist job after just seven months or so. He was probably the smartest person in an administration full of dummies and he had inordinate power. All he had to do was not get himself fired, and he could have continued wielding that power for his own personal and ideological benefit. Instead he picked the kinds of fights with Trump’s family members that landed him out on his ass.

So tell us again how this guy, who has done one dumb thing after another for the past year, is in position to judge the intellect of someone like Hillary Clinton. I’ll give you a hint, Steve: I’ve been covering you and Hillary both for quite awhile, and I can tell you two things. 1) I’m smarter than you are, and 2) Hillary is smarter than I am. Bon voyage, you racist dumbass. Don’t let the lid hit you in the head when you crawl back into the sewer.å