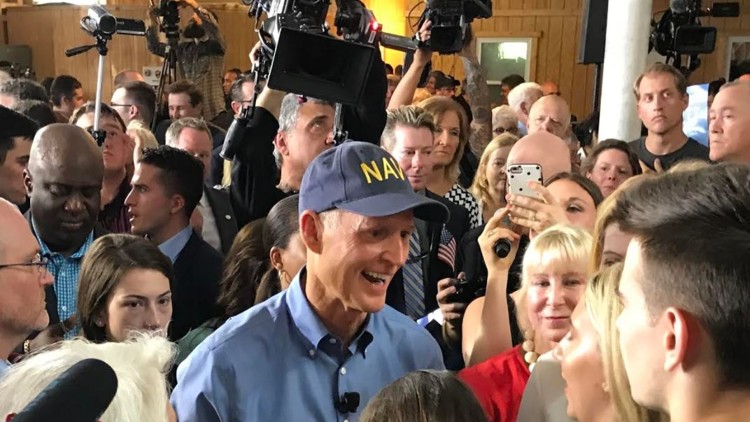 Rick Scott, who spent years destroying the health care industry, and then spent years destroying the state of Florida as its corrupt Governor, now wants to become the state’s corrupt Senator. Scott is one of the most uniquely worthless politicians of his era, because he’s so plainly for sale to the highest bidder, the most corrupt of billionaires have always been quick to fund his campaigns – which explains why he’s in a shamefully close race against respected Democratic Senator Bill Nelson.

But I’m not here to talk about any of that. I’m here to talk about that damn hat. Rick Scott keeps making a point of wearing a “NAVY” baseball cap during his political photo-ops. When he shows his face in campaign ads on television, he wears the hat. When he occasionally pretends to care about Florida’s hurricane victims, he wears the hat. It’s time for him to take it off.

To be clear, Rick Scott is a Navy veteran – but just barely. The Palm Beach Post, a major Florida newspaper, says that Scott only served twenty-nine months – just over two years – before leaving. In other words, he didn’t even complete his deployment. Scott spent his time in the Navy playing shenanigans like buying up all the soda and then selling it to his fellow sailors at a markup; the guy was a con artist even then. Still, Scott served twenty-nine more months in the military than most of us did. That’s not my point. It’s that Scott has gone on to screw Florida’s military veterans out of health care and other benefits, including – according to Orlando Weekly – “defrauding the military’s healthcare program.”

Meanwhile, Bill Nelson was a Captain in the Army during the Vietnam War. He’s also used his subsequent time in politics to try to help military veterans. You know why you don’t see Nelson running around wearing an “ARMY” hat? He doesn’t need to. Rick Scott may have briefly served in the Navy, but he’s done wrong by the military ever since. Military veteran advocacy group VoteVets is going squarely after Rick Scott for a reason: It’s time for him to take off that damn hat. photo: Palm Beach Post