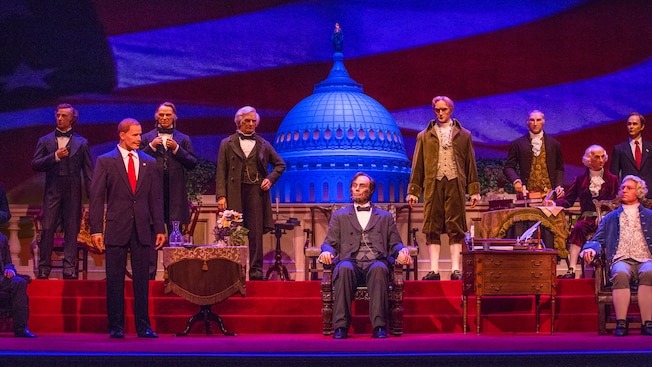 For months, mainstream Americans have been wondering how Disney World would handle the illegitimate election of historically unpopular racist traitor Donald Trump when it comes to the Hall of Presidents attraction. Trump’s mere presence would be inappropriate for a family friendly attraction, or for that matter a patriotic one. And now it turns out Disney is indeed making moves to sidestep Trump as it prepares to revamp the Hall.

For a few decades, the tradition has been for the animatronic version of the current President to speak during the presentation. But Disney obviously couldn’t allow that to happen, for too many reasons to list. So instead it’s revamping the presentation in such a way that only the historical Presidents will get to speak, according to a new Vice report (link). Of course that still won’t be enough to appease the inevitable protesters

Millions of Americans will view the mere addition of an animatronic Donald Trump to the Hall of Presidents as an unpatriotic insult. Trump is the most openly racist man of his era, and he’s an admitted serial sexual predator. That’s before getting to the fact that the Russians rigged the election to install him as a puppet in the White House, and that his eventual removal by impeachment or the 25th Amendment will be viewed as one of the most important victories for American democracy in its history.

And yet, if Disney were to exclude Trump from the Hall of Presidents entirely, it would face pushback from the shrinking number of fringe Americans who still support his illegitimate occupation of the White House. One way or the other, Disney can’t win – and this compromise of having a silent Trump included with the real Presidents may end up being a failed experiment. We wouldn’t be shocked if the eventual end result is that the Hall is shuttered entirely until after Trump has been removed from office.

← The impeachment of Donald Trump is a long and winding process. But we’ve arrived at Step One.House Intel Russia probe expands to include yet another former Donald Trump campaign adviser →
Scroll To Top