U.S. Congressman Ted Lieu hasn’t hesitated to call out Donald Trump during the course of the past hundred days. Lieu has introduced legislation aimed at taking away Trump’s nuclear launch codes, and he’s also slammed Trump for having a “fake Press Secretary.” Now that we’re reaching the hundred day mark, Lieu has issued a report card on Trump – and let’s just say it’s not exactly full of passing grades.

Rep. Lieu has posted the “report card” on his Twitter account for all to see. He assigns Donald Trump several grades in various subjects, ranging from A-plus to F. For instance Trump gets a C-minus in English for overuse of all caps, inventing the word “bigly,” and not knowing how to spell anything in his tweets (we recommend Twitter for Dummies). Trump also gets a D in Math for not understanding that a tax cut for the wealthy can’t magically “pay for itself” (we recommend Math for Dummies).

Lieu is more generous in the Physical Education category, where he gives Trump an A-plus for getting so much exercise by constantly playing golf instead of doing his job. However, Trump receives an F in both Science and the Works Well With Others category, with the latter grade being explained that he “appears to only work well with Russians” (we recommend The Plot to Hack America). 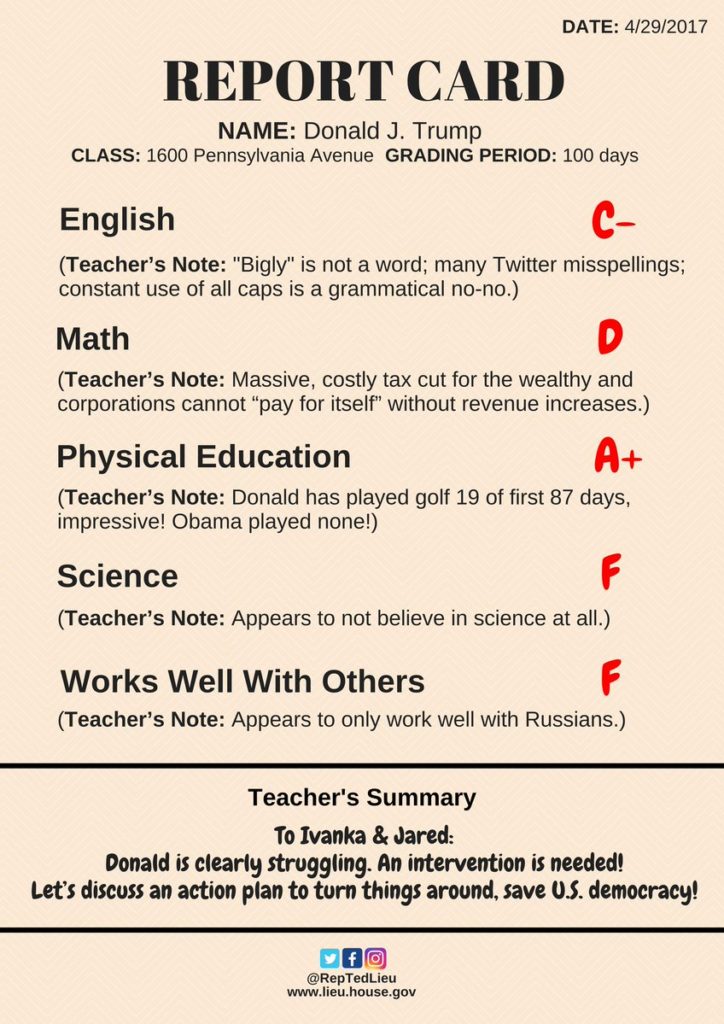 This is not the first time in which Congressman Ted Lieu has issued provocative words or actions in Donald Trump’s direction. For instance Lieu introduced legislation to try to get a psychologist installed in the White House (link) and has also asserted that the Trump administration just “makes shit up” as it goes along. Contribute to Palmer Report

← How screwed is Paul Manafort? His partner in crime just registered as a foreign agent without himDonald Trump couldn’t even win over Jeffrey Lord with his boycott of White House Correspondents Dinner →
Leave a Comment