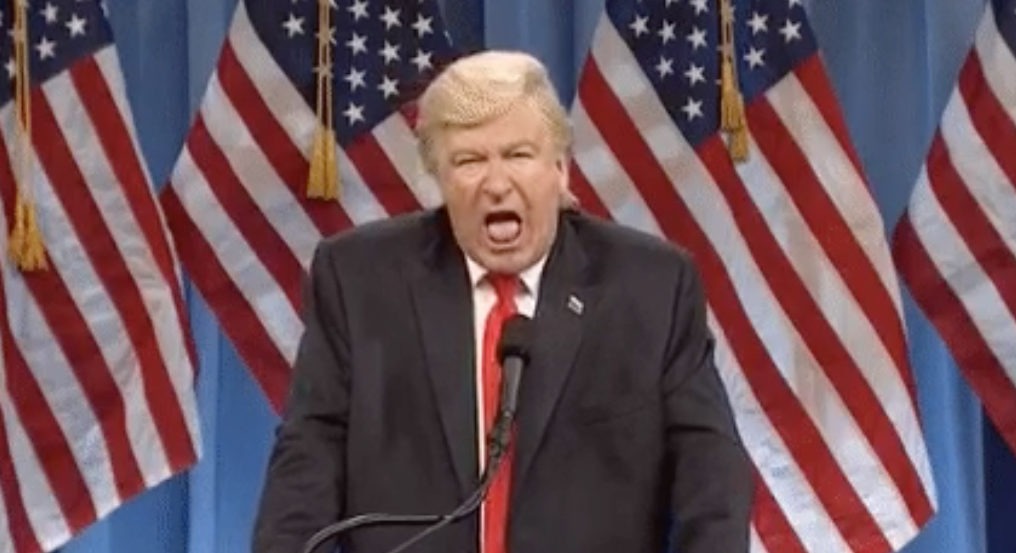 Alec Baldwin seems to be having fun lampooning Donald Trump on Saturday Night Live each weekend, but he’s clearly no fan of the man he’s portraying. Baldwin has spoken negatively of Trump both during and after the election, and last week he joined the protesters outside Trump’s Manhattan home. But now that Trump has instituted an executive order which left Muslims detained at airports across the United States, Baldwin is drawing the line.

In a series of tweets posted to his @ABFalecbaldwin account on Saturday evening, Alec Baldwin declared the following: “This country had a calling card.
We all knew what it was. It wasn’t Wall Street or Hollywood or the right to bear arms that brought countless people, America’s future, to this country. It was freedom. Freedom was our calling card. Trump wants to kill that.” Then he added his voice to the sentiment of a growing number of Americans when he flatly declared “Trump’s gotta go.”

In order to fulfill what Alec Baldwin and others are now demanding, are multiple legal ways of removing Donald Trump from power. One is for Congress to impeach him, but the Republican majority will be hesitant to oust a president from their own party. Another is for the Vice President and a majority of the Cabinet to invoke the 25th Amendment, thereby removing him, but his cabinet is full of loyalists who are unlikely to move against him.

So the most likely course of action is to simply drive Donald Trump’s approval rating so deep into the gutter that the Republicans in Congress feel they have no choice but to move forward with impeachment and removal, in order to retain their own respectability in the 2018 midterm elections — in which case Trump could choose to resign rather than go through impeachment hearings.

After all, that’s how Richard Nixon was ultimately forced out. His approval rating had to drop to around the 25% range before members of Congress from his own party forced him out. For reference, Donald Trump’s approval rating is currently around 37%. If protesters and the resistance can drive him down another twelve points, the insistence of Alec Baldwin and others that “Trump’s gotta go” may indeed become a reality.