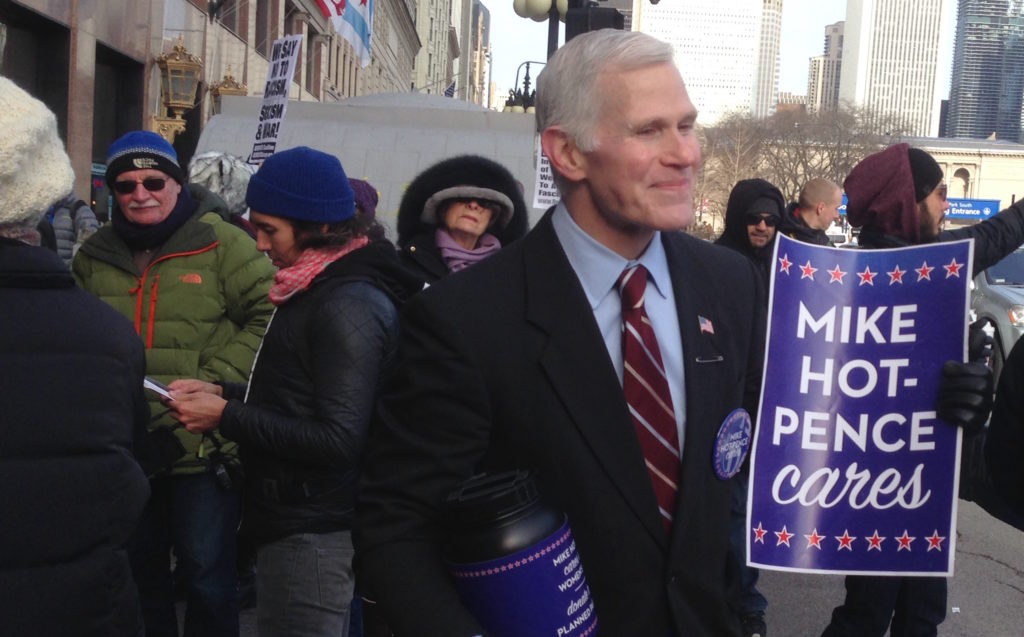 Mike Pence held an RNC fundraiser in Chicago on the day before New Years Eve, and let’s just say the windy city didn’t deliver the warmest of welcomes. The ultra conservative “vice president-elect” traveled to the liberal city, which voted overwhelmingly against him and his running mate Donald Trump in November, and the event was besieged by protesters – including an increasingly popular gay Mike Pence doppelganger who calls himself – in all seriousness – “Mike Hot Pence.”

Local Chicago television station WGN reports that around a hundred protesters sprung into action in the city upon Mike Pence’s arrival, whose fundraiser went for as much as $34,000 per seat to super wealthy Republican donors. The Chicago Tribune reports that the number of protesters was closer to one hundred and fifty, and that the chants from the protesters included “Our bodies, our lives, our right to decide!” and “Racist, sexist, anti-gay! Mike Pence go away!” and “No Trump, no Pence! No KKK! No fascist USA!”

During his time as Governor of Indiana, Pence has established himself as being fiercely against women’s rights – hence the chant above – as well as fiercely against gay rights. That’s led to the increasing popularity of a protester who happens to look a lot like Mike Pence, and who uses his public appearances to raise money for the pro-LGBT causes that the real Mike Pence has fought against. According to Chicago radio station WBEZ, the man known as “Mike Hot Pence” showed up to protest at the real Mike Pence event.