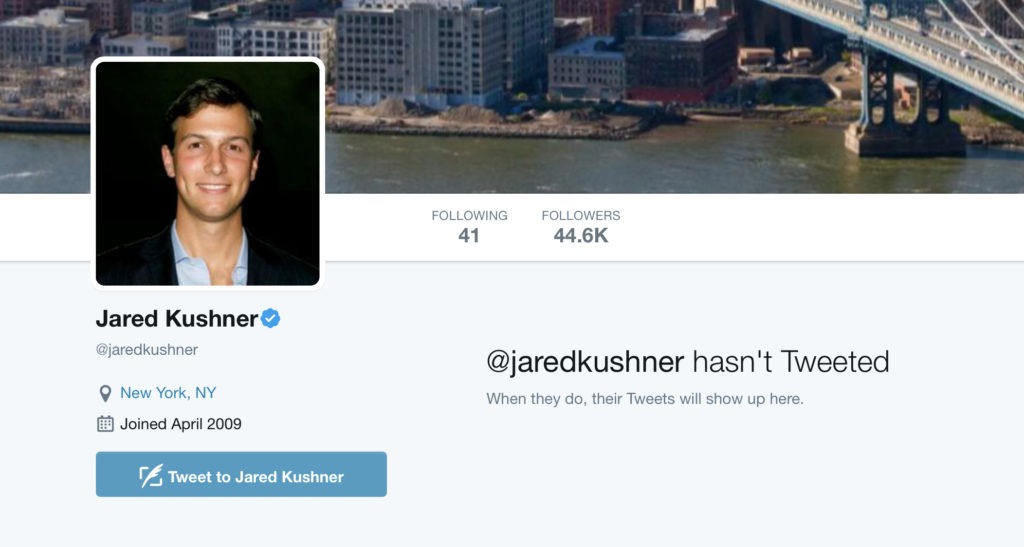 After it was reported yesterday that Donald Trump’s son-in-law Jared Kushner had been named a person of interest in the investigation into Trump’s Russia scandal (link), word quickly spread across the internet that all of Kushner’s past tweets were suddenly missing. Had he panicked and deleted them all, for fear they might be used as evidence in the investigation?

This is, in fact, precisely how Twitter accounts look after someone has gone back and deleted all of their tweets. And we’ve spoken with technical consultants who have confirmed to us that there are software scripts which can quickly and easily delete all past tweets from your account, no matter how many existing tweets you might have. But here’s the catch: Kushner never had any tweets in the past several years to begin with.

If you use Archive.org to take a look at “twitter.com/jaredkushner” in past iterations, you’ll see that he had no tweets on his account back in January (link). Nor did he have any tweets as of February, March, or April. We did find a pair of stray tweets on his account all the way back in 2011:

But apart from those tweets, which were long ago removed, Kushner’s Twitter account has generally always been empty. Each time a controversy surfaces around him, members of the public check his Twitter page to see if he’s had any immediate response – and upon finding a blank page, they mistakenly assume he’s wiped all of his tweets due to the controversy. So why does he even have a Twitter account if he doesn’t use it?

Some public figures have been known to register their own names on Twitter, with no intention of tweeting anything, just to prevent impostors from being able to impersonate them. The notoriously silent Kushner may have been planning well ahead, as he registered his dormant Twitter account all the way back in April of 2009. But regardless of his motivation for maintaining a blank Twitter account, our fact check reveals that he didn’t panic and delete his existing tweets, because he didn’t have any tweets to begin with. We rate this claim as False.