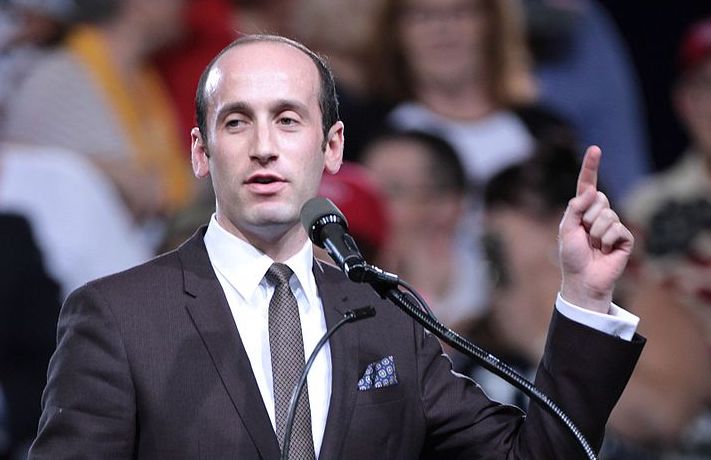 Donald Trump’s penchant for projection has apparently been embraced by Stephen Miller, who audaciously claimed that no incoming President has ever been dealt a better hand than Joe Biden. Let’s review:

When Biden came into office, the coronavirus pandemic was still raging, the vaccine rollout was mismanaged (20 million vaccines unaccounted for), the economy was still in bad shape, and Trump had spent the post-election interlude trying to undermine the results of a free and fair election for the Presidency, first by legal means (over 60 lawsuits), and then by illegal means (trying to strong-arm state and local election officials in swing states to tip the election his way, and riling up his base to storm the Capitol and attempt to prevent the certification of his electoral vote loss).

In engaging in these petulant and seditious actions, Trump also stoked divisiveness throughout America as the Biden Administration began. And, as Palmer Report has pointed out, Trump had also taken the unprecedented step of sabotaging the ordinarily cooperative transition process from one Administration to the next.

Now guess who did come into Presidency with a booming economy and no crises: Donald Trump. Things were so good, Trump tried to take credit for them, especially the economy. For instance, he often touted his low overall unemployment rates and Black unemployment rates, but they were well on the decline under Obama.

Overall unemployment peaked under Obama at 10% in October, 2009, in the aftermath of George W. Bush’s Great Recession, but Obama brought it down to 4.7% near the end of his second term in December 2016. Under Trump, the decline continued to 3.5% in late 2019 through February 2020.

Obama inherited a Black unemployment rate of 12.7% from Bush, and it peaked at about 17% in the aftermath of the Great Recession, but then Obama brought it down to 7.5% by the time he left office. Under Trump, it continued to decline, reaching a record low level of 5.4% in 2019. Essentially, Trump just followed the trendlines Obama had already turned in the right direction, but, of course, Trump could never give credit where credit was due, and claimed that all the success was due to his efforts.

Naturally, Trump/Miller neglect to mention that Trump’s bungling of the coronavirus pandemic and the resulting devastation to the economy caused overall unemployment to spike to 15% in April, 2020, before settling down to 6.7% near the end of Trump’s term (2 percentage points higher than it was at the outset of his term), and caused Black unemployment to spike to 16.7%, before declining to 9.2% as Trump left office (or 1.7 percentage points higher than it was when he arrived).

Trump followed the precedent of his most recent Republican predecessors (both Bushes) in leaving office with a higher unemployment rate than he inherited. However, he outdid them in mismanaging the economy, as Trump was the first President since Herbert Hoover (who presided over the Great Depression) to leave office with fewer Americans employed than when his term began. In short, Biden was not dealt the best hand of any incoming President, but rather, on key indices, Trump left Biden with a worse situation than Obama had left Trump.

Trump’s habit of trying to claim victory while ignoring where he started from is right in line with Miller’s natural inclinations. Don’t forget, Stephen Miller is the guy who reportedly hopped a fence and joined the last stages of a girls race at his high school to “prove” that boys were superior athletes — as if jumping in at the end of a race with fresh legs proved anything about his relative prowess.

A natural born liar, Miller no doubt enhanced his skills under the master, Trump. For these two and their Republican comrades, gaslighting and projection are basically all they have to offer the American people.