Donald Trump’s past year in office has revealed that he has no answers. His legislative accomplishments are nearly nonexistent, he keeps blowing through poorly chosen staffers, he’s historically unpopular, and his presidency has been defined by criminality and scandal. But back before Trump made the worst mistake of his life by running for president, he thought he had all the answers. Some of his old tweets are now coming back to haunt him in particularly embarrassing ways.

For instance, this week White House aide Rob Porter resigned after the media exposed that he had an alleged history as a sexual domestic abuser. Trump’s team knew about it and kept the guy employed anyway, then went to extreme lengths to try to cover it up once it was about to become public. After the coverup became a major scandal, Trump was forced to address the issue during a press conference yesterday.

Trump’s idiotic answer: he feels bad for the guy, and he thinks it’s important that the guy is denying the accusations. There are also widespread reports that Trump is privately blaming Porter’s girlfriend, Hope Hicks, for the entire thing. Trump appears to be incapable of believing that domestic abuse exists. That’s a far cry from the viewpoint he appeared to hold when he posted this tweet about Rihanna and Chris Brown back in 2011: 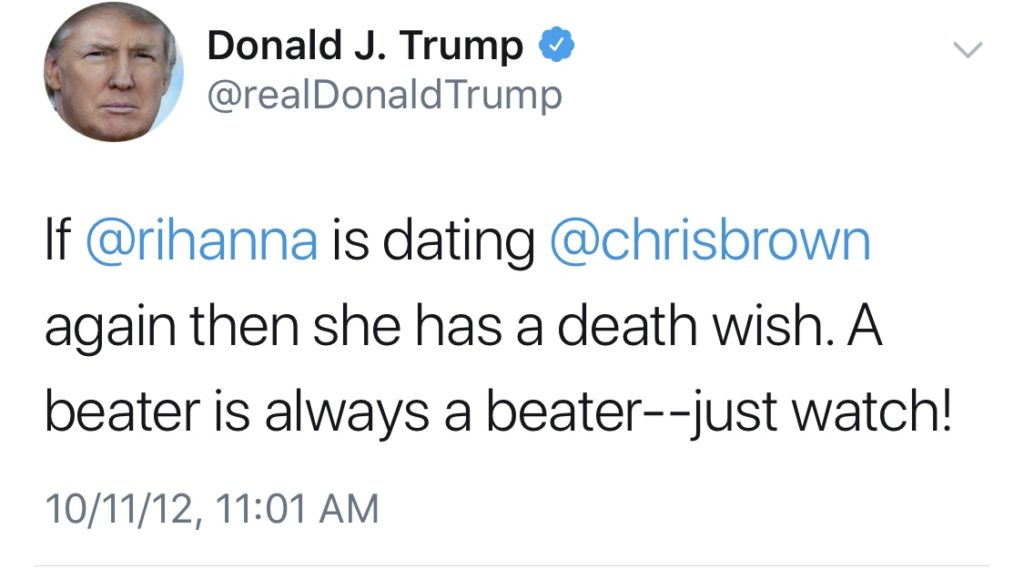 Of course even back then, Donald Trump was trying to lay the blame at the feet of the female victim instead of the male abuser. That’s not shocking, considering that Trump is one of the most clinically anti-woman people on the planet, as evidenced by his long and admitted string of sexual assaults. But back in the day, even as he was wrongly blaming women for the domestic abuse they faced, at least he seemed to believe women when they said they were being physically abused. Trump has always been trash; he’s gotten even worse over the years.