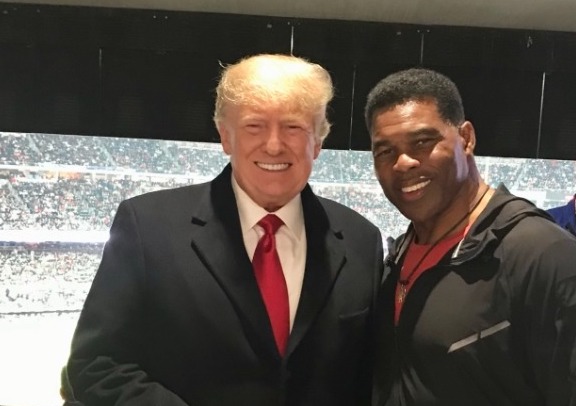 The late Aaron Hernandez was well on his way to becoming one of the greatest football players of all time. Hernandez had it all. He was a young man with the world at his feet. He was a millionaire with a magnificent house, a beautiful, adoring fiancé and a child on the way. Bafflingly, Hernandez chose to be a murdering thug instead of a gridiron legend, a part time gangster instead of a superstar. During the 2013 offseason, Hernandez was arrested and charged with murder. He was subsequently sentenced to prison for life without possibility of parole, where he committed suicide in 2017.

An autopsy revealed that Hernandez suffered from severe CTE, or chronic traumatic encephalopathy. It is characterised by acute damage to the parts of the brain that play important roles in memory, impulse control and behavior. It may explain why this otherwise sweet and thoughtful young man became a violent, vicious killer.

Does football legend Herschel Walker suffer from CTE? There are some who suspect he might. Walker has been open about his long struggle with mental illness. In a 2008 book he wrote about being diagnosed with dissociative identity disorder, once known as multiple personality disorder. So there’s certainly that. His mental illness combined with CTE could make it problematic, to say the least, for him to hold public office.

Unfortunately there are shockingly few barriers for anyone wishing to be a candidate for the United States Senate. One need not have any qualifications whatsoever beyond a willingness to run. In their wisdom the framers of the Constitution omitted many barriers to entry for most of the newly formed government, wishing to avoid the appearance or actuality of elitism. This well-meaning egalitarianism makes it possible for people like Herschel Walker to run, even if they are incompetent due to mental illness and apparent brain damage.

I come not to bury Herschel Walker nor to excuse him, but to explain him. His baffling lifetime of erratic, violent and nonsensical behavior may be beyond his control. He’s often compared to Donald Trump, but I think this may be unfair. Trump is merely evil. I suspect Walker, by contrast, is so severely brain damaged that he cannot be held responsible for his actions. His handlers and promoters are keeping him away from debates because they know this, or at least suspect this. It may in fact turn out that Mr. Walker is being exploited. It may turn out that he is not an idiot like Trump after all, but that he is mentally disabled. We shall see.

Whatever the case, Walker’s handlers have an uphill battle to see him elected to the Senate. It’s not going to be easy to explain away his refusal to debate. The only time that strategy can ever be successfully pulled off is when the candidate is so glitteringly covered in superior qualifications as to make debate with his or her lesser, mortal opponents an insult. Walker is a long, long way away from that ideal.

As with Trump, it doesn’t seem to really matter what Walker says or does. With both men their celebrity and charisma will guarantee the staunch loyalty of the MAGA Republican base. That may be enough for Walker to win the primary, but it’s doubtful that he can take the Senate with just the minority MAGA crowd. Too many people are going to see him for what he really is, a sad man with something terribly wrong with him.

I would have liked to have known who Herschel Walker really was apart from the unnecessary damage done to his brain as the result of his brutal, savage sport. Maybe he would have been a jerk anyway. Maybe he would have been evil anyway. But the fact that the Republican machine would stoop to exploiting this confused man in order to secure a majority in the Senate certainly reveals how evil they are. And, as ever, ladies and gentlemen, brothers and sisters, comrades and friends, stay safe.

← The DOJ’s arrest of New York’s Democratic Lt. Governor Brian Benjamin is bad news for a number of RepublicansTed Cruz gets into humiliating feud with a bunch of college kids →