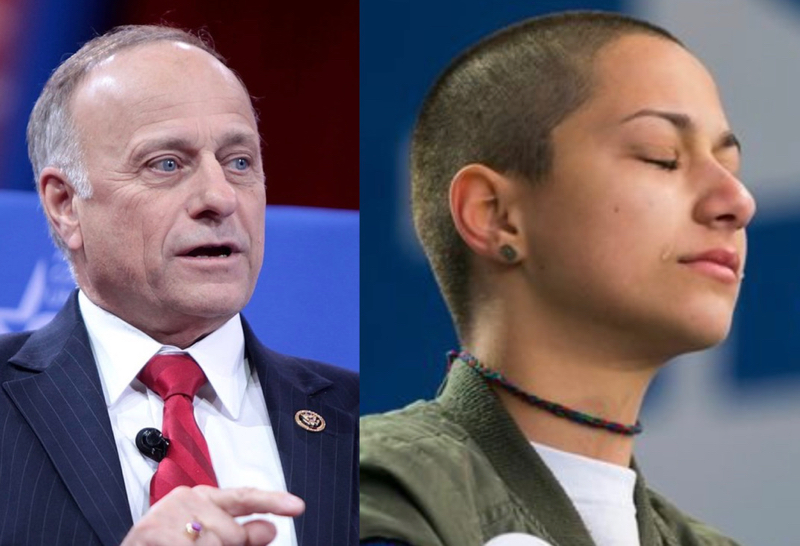 Two days after Stoneman Douglas High School shooting survivor Emma Gonzalez gave an impassioned and widely praised speech at the March For Our Lives, those on the other side of the issue are resorting to increasingly dishonest and ugly counterattacks. Pro-NRA people on social media have been circulating a fake image of Gonzalez supposedly ripping up the Constitution. Now a Republican Congressman has joined the attacks on Gonzalez, but it’s not going well for him.

Emma Gonzalez, who is of Cuban descent, was wearing a Cuban flag patch on her jacket. This led racists and gun addicts to seize on the opportunity to dishonestly spin this into some kind of pro-Castro or pro-communism statement from Gonzalez, so they could criticize her for it. Republican Congressman Steve King of Iowa, whose words and record over the years have revealed him to be both a racist and a gun addict, posted this message on his official Facebook page this morning: “This is how you look when you claim Cuban heritage yet don’t speak Spanish and ignore the fact that your ancestors fled the island when the dictatorship turned Cuba into a prison camp, after removing all weapons from its citizens; hence their right to self defense.”

Despite some claims that the post has since been deleted, it’s still clearly visible on Steve King’s Facebook page as of Monday evening (you can view it here if he still hasn’t deleted it by the time you’re reading this). This means that even if a staffer posted the attack on Gonzalez without King’s knowledge, he’s surely aware of it by now, and must approve of the message. Thus far roughly thirteen hundred people have responded to the post by using Facebook’s orange “angry face” alternative to the like button. Many of the comments have been overwhelmingly negative.

Emma Gonzalez has not yet directly responded to Steve King’s attack, but her Stoneman Douglas classmate David Hogg tweeted this at King: “She’s a beautiful woman of Cuban descent and we love her. You would too if you ever got the chance to meet her. We need to love each other as Americans regardless of our descent, ethnicity or race.” He then added “Also who’s running against this guy?” Gonzalez retweeted both of Hogg’s tweets.