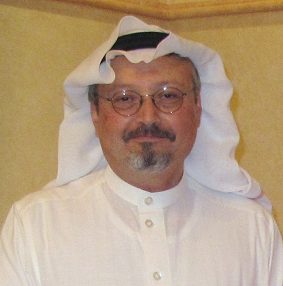 In what is clearly an attempt at a Friday night news dump, the government of Saudi Arabia has just admitted that Washington Post journalist Jamal Khashoggi is dead. It’s taken the Saudis seventeen days to finally admit the obvious, and now they’re floating one of the most ridiculous excuses of all time in the name of trying to mitigate their own culpability in Khashoggi’s murder.

As reported just now by everyone from NBC News to the BBC, the Saudi Arabian government now says that Jamal Khashoggi died after he got into a “fight” or a “quarrel” inside the Saudi consulate. No really, this is their official cover story. They want us to believe that Khashoggi went inside the consulate to get paperwork for his marriage, saw fifteen henchmen with a bone saw, and thought “I think I’ll go get into a fight with them.”

This would be laugh-out-loud ludicrous if the whole situation weren’t so painfully and tragically unfunny. No serious person is going to believe for one minute that Jamal Khashoggi died because he made the mistake of getting into the rough equivalent of a bar fight with some hooligans. So naturally Donald Trump is going to believe it, or try to convince us to believe it, because Trump is just that personally beholden to his Saudi royal family overlords.

But so be it. Saudi Arabia admitted by default today that it can’t come up with an even semi-plausible excuse for Jamal Khashoggi’s death that believably gets the Crown Prince off the hook. If Donald Trump wants to publicly marry himself to this idiotic new cover story, it’ll only further expose him as a puppet who’s willing to follow his criminal overlords as far down the rabbit hole as necessary. Meanwhile, investors worldwide are going to keep punishing Saudi Arabia until it has no choice but to give up the Crown Prince.