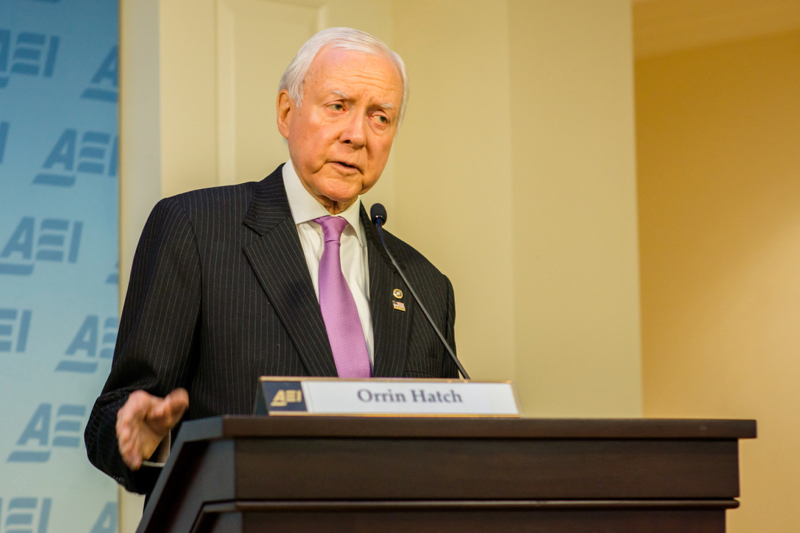 Since Senator Hatch of Utah announced his retirement, much has been written about what this means regarding the Trump investigation, and Mitt Romney’s ambition to return to political office. Speculation that Hatch decided to call it quits because he knows the Trump train is due for a disaster is valid. Speculation that Romney played a role in forcing Hatch’s announcement is also understandable. What seems underreported, though, is that this is likely positive news for Trump’s political opponents.

Of the handful of iron laws of American politics, the one that perhaps reasserts itself the most often is that midterms are almost always rough for the president’s party. Over the past few decades the president’s party only avoided disastrous midterms twice, in 1998 and 2002. Despite this trend Democrats’ odds of retaking the Senate should be slim on paper. Democrats have to defend 24 seats and 10 of these are in states that President Trump carried. In spite of this equilibrium, the Democrats’ prospects of retaking the Senate look shockingly good.

Thus far red state Democrats defending their seats are facing tough races to be sure, but no independent observer is counting them out. Additionally, Dems have attracted strong candidates in unlikely states like Texas, Tennessee, and Arizona. Hatch’s retirement offers yet another boost to Democrats’ prospects, if only a minor one. Even though Democrats have a solid candidate in Salt Lake City Councilwoman Jenny Wilson, a higher profile and more dynamic challenger than Dems have put forward in decades, Hatch’s odds of victory were extremely high.

With his exit, however, things could just become interesting. Mitt Romney is expected to declare his candidacy for the seat, and if he makes it onto the ballot he will be the front runner. GOP infighting and the state’s out dated convention system could pose a roadblock for Romney. Utah Republicans select their candidates through a convention system, in which party insiders get to decide who will represent their party rather than voters. If candidates are unhappy with the convention results, they must collect thousands of voter signatures to force a proper primary election.

This system in recent years has tended to favor tea party candidates, as was the case in 2010 when Senator Bob Bennett was forced out due to being seen as insufficiently conservative. This is unfortunate for Utah voters as they are a rare voting bloc that expects compassionate conservatism to be more than just a campaign slogan. If the gossip indicating that Trump really does not want Romney in the Senate is accurate, sabotaging Romney at the convention is possible. In such an event Romney could force a primary or run as an independent, and either scenario is the sort of drama that Republicans do not need in an already tough cycle.

If for some reason Romney backs out, there are also more moderate Republican candidates who may be persuaded to jump into the election, like third party presidential candidate Evan McMullin, who left the party because of Trump. By exiting from the race, Hatch has made GOP infighting very likely, which in turn improves the chances of a Democrat or Independent emerging the victor. Regardless of who becomes Utah’s next Senator, this is a major loss for Trump. While Hatch once had a bipartisan streak, working with Democrats on things like the Children’s Health Insurance Program (CHIP), he has drifted far to the right over the past decade. Five Thirty Eight even has Hatch listed as one of Trump’s most loyal backers, voting his way on roughly 96% of important votes.

This sort of loyalty is hard to come by, and while Mitt Romney is no friend to liberals, he’s unlikely to be as Trump-friendly as Orrin Hatch has been. As such not only has Trump lost one of his strongest allies, his camp must also choose between forcing a GOP civil war by getting behind a tea party candidate or accepting an at least marginally more moderate Republican like Romney. The far right donor class is already making moves to try and head off Romney, and if things get to messy, a repeat of the GOP’s Waterloo in Alabama could be on the horizon. You can follow Jenny Wilson, the Democratic candidate for Senate in Utah, on Twitter.