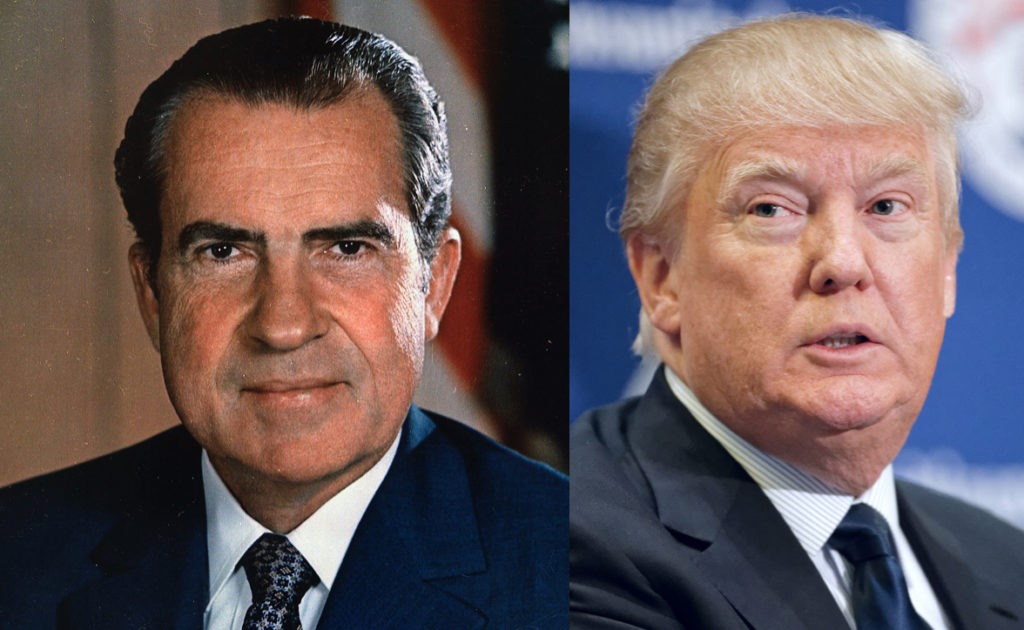 As evidenced by the painting hanging next to his desk, Donald Trump wants you to think he’s emulating Andrew Jackson – and on some level he is, as Jackson was a bitter racist who routinely ran roughshod over the Constitution. But based on his actions, it’s clear that Trump is more closely emulating someone else: Richard Nixon. In fact Trump is taking pages out of Nixon’s playbook left and right.

That seems odd at first blush, considering that Richard Nixon’s strategy led to his ouster. But it’s all right there. Nixon committed obstruction of justice to try to cover up his crimes. When Congress tried to move in on his obstruction, he committed more obstruction in the name of trying to fend off the inevitable. Nixon used racism to get the rural white votes. Nixon made a point of insulting the media. Nixon even tried to hijack the nation’s Fourth of July festivities for his own greater glory. Sound familiar?

While sociopaths do tend to think alike, it all seems a little too similar to be mere coincidence. Moreover, Nixon and Trump have such vast differences in their respective sociopathies, and frankly in their respective intelligence levels, it’s difficult to imagine that the two of them would independently make the exact same decisions. Instead, it feels like Trump is making a point of copying Nixon’s every move big and small – and there may be a reason for that.

Sure, Richard Nixon’s strategy did fail to make his scandals go away. Instead it took him down. But Nixon did succeed in dragging out his scandals for as long as possible, as Watergate came to light a couple years before he was finally ousted for it. Unlike Nixon, Trump has been fending off criminal scandals from the day he took office. It’s as if Trump took office and immediately decided that his only hope was to copy Nixon in order to drag out his scandals long enough for him to survive most or all of his term. Either that, or Trump is mistakenly copying Nixon’s playbook because he didn’t bother to read it all the way to the end.

← Nancy Pelosi hints at her real plan: putting Donald Trump in prisonDonald Trump reminds us all just exactly how stupid he is →
Leave a Comment