For the past week and a half, Donald Trump has been trying to throw Mike Pence under the bus in his Ukraine scandal. First Trump called a press conference and repeatedly asked the media to seek out the transcripts of Pence’s phone calls with the President of Ukraine. Then Trump leaked details of Pence’s involvement to the media. It turns out Trump was onto something for once.

Unless you spent yesterday under a rock, you’re aware that Rudy Giuliani’s top two henchmen in the Ukraine scandal were arrested by the SDNY while trying to flee the country. Donald Trump then stood in front of the cameras and rambled semi-incoherently about a photo that he’d posed for with the two arrestees. So guess who else is in the photo? Take a look: 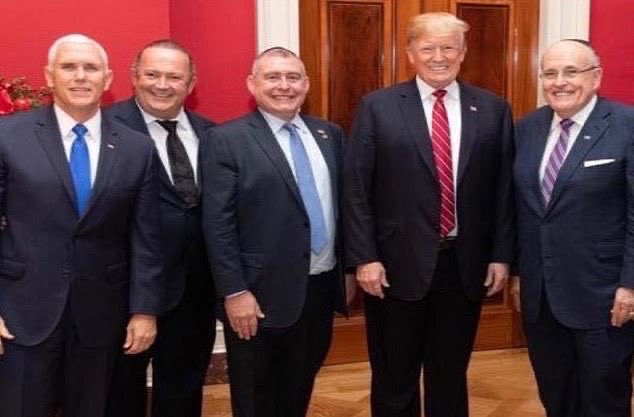 Yes, this photo is real, as verified on-air by Rachel Maddow last night. That’s Donald Trump, Rudy Giuliani, the two guys who just got arrested while trying to flee the country, and yes, Mike Pence. Sure, it’s just a photograph. But it’s another data point connecting Pence to the Ukraine scandal. It also raises the question of why Trump and Pence would be in this photo together with these henchmen. It’s as if Trump was making a point of documenting Pence’s involvement, just in case it all went wrong and he needed a scapegoat.