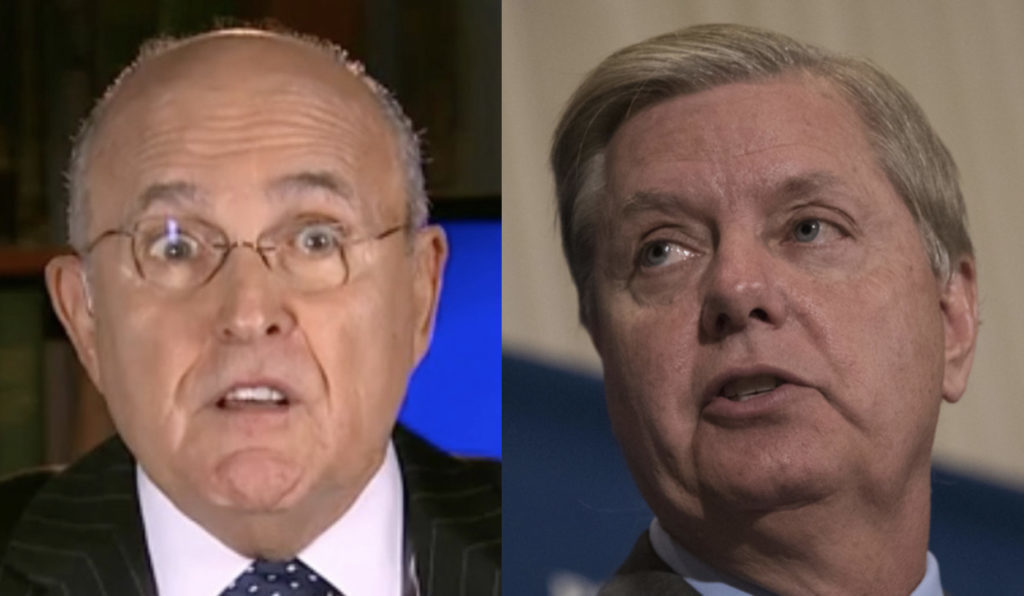 When it comes to unraveling scandals, the participants always end up turning on each other – and the more erratic those participants are, the more fireworks there can end up being when they do turn on each other. This brings us to two of Donald Trump’s most mentally unstable Ukraine scandal henchmen, Lindsey Graham and Rudy Giuliani.

In fairness to Lindsey Graham, there is no known evidence that he was a participant in the criminal plot to extort Ukraine into rigging the 2020 presidential election in favor of Donald Trump. Instead, Graham is merely helping to lead the criminal coverup of the scandal, for reasons that are still only fully known to him. But Rudy Giuliani is more deeply involved in Trump’s Ukraine extortion scandal than just about anyone else, and now he and Graham can’t figure out what to do with each other.

Lindsey Graham told reporters today that if Rudy Giuliani wants to publicly testify before Graham’s Senate Judiciary Committee, then “I hope you know what you’re talking about.” This is notable because it means Graham is already trying to insulate himself against a scenario in which Rudy uses Graham’s committee to go on television and make an incoherent fool of himself.

We’ll see if Lindsey Graham actually allows Rudy Giuliani to publicly testify. But Graham is already publicly making clear that he doesn’t expect Rudy’s testimony to go well. This means that, even as far off the deep end as Graham is, he understands that Rudy is even further off the deep end. The big question is whether Graham might end up using the Senate Judiciary Committee to try to scapegoat Rudy to his face while everyone watches, in a last ditch effort at protecting Donald Trump.