Special Counsel Robert Mueller dropped an eight hundred page bomb on Paul Manafort today, exposing the details of essentially every crime Manafort has ever committed in his life. There’s no mention of Donald Trump, but as we’ve explained, that’s a good thing for the Resistance, and a bad thing for Trump. However, a certain Republican politician does get mentioned, and not in a good way.

One of Mueller’s attachments exposes Paul Manafort’s circa-2013 strategy to illegally lobby the United States government to support the Kremlin-controlled Yanukovich regime in Ukraine. It reveals that Manafort and his associates managed to convince the “Chairman of the House Foreign Affairs Committee” to get on board, and to apparently go so far as to frame the Kremlin puppet government as if it were “pro-western”: 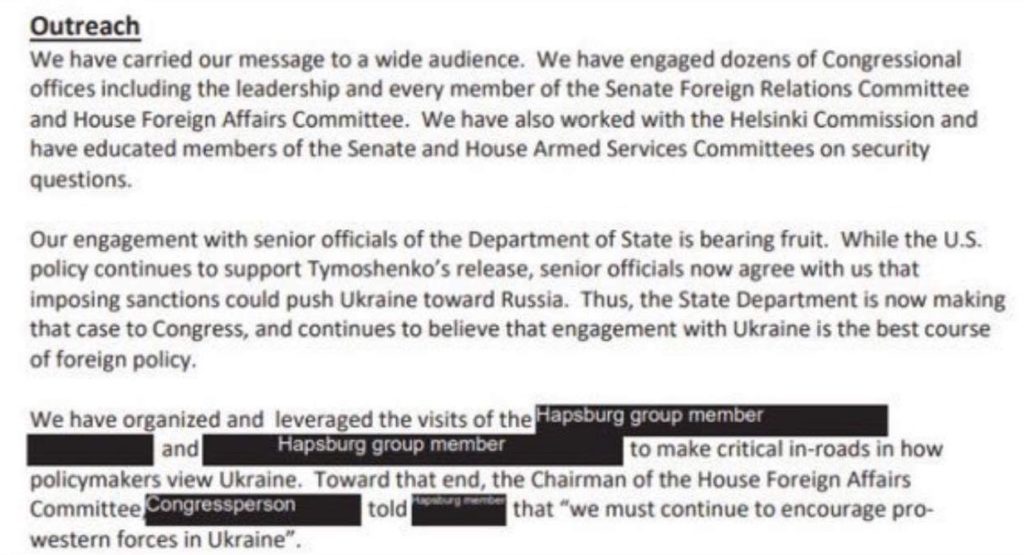 This doesn’t necessarily incriminate the Chairman, but it certainly does implicate the Chairman as having had a relationship with Paul Manafort that was – at the least – criminal on Manafort’s end. The question of course is whose name is blacked out. For historical reference, Republican Congressman Ed Royce became the Chairman of the House Foreign Affairs Committee on January 3rd, 2013. However, the name “Ed Royce” is too short to take up the amount of space that’s been blacked out, so it’s not him, unless there are additional words blacked out next to his name. Interestingly, Royce announced his retirement at the start of 2018, and is no longer in Congress.

There is another possibility here. It’s long been widely reported that Robert Mueller is investigating Republican Congressman Dana Rohrabacher’s extensive ties to the Kremlin in general, and to the Trump-Russia election conspiracy in particular. Rohrabacher’s name would pretty much exactly fit within the blacked out space above. The catch is that he wasn’t the Chairman of the House Foreign Affairs Committee; he was the Chairman of one of its subcommittees. Rohrabacher sought reelection in 2018 but lost. Intriguingly, Ed Royce reportedly stopped Rohrabacher from going to Russia in 2017.

Whoever it is, it’s now more clear than ever that Robert Mueller’s investigation has gone far beyond the Trump-Russia 2016 election conspiracy, and has reached members of Congress who may have had some criminal connection to the primary Trump-Russia players. This comes after a filing last year which asserted that a still-unnamed 2016 candidate for Congress sought a copy of the emails that Russian hackers stole from the DNC and gave to WikiLeaks.

www.palmerreport.com
2017
SHARES
Facebook ShareTwitter ShareEmail this articlePrint Article
LinkedinGoogleWhatsappPinterestRedditStumbleuponBufferTumblrPocketLine
← Donald Trump goes off the deep end, quotes some guy no one has ever heard ofThe real reason Sarah Huckabee Sanders didn’t resign when she was supposed to →
23 Comments