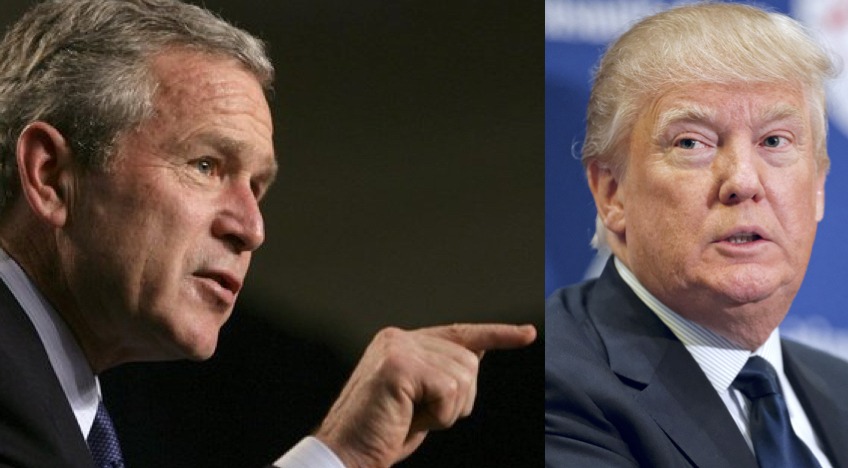 As the Trump campaign implodes, it looks increasingly likely that this Republican president’s days in office are numbered. While we’re focused on making sure that is the case, let’s not forget that the prior Republican president was not so terrific either. While George W. Bush’s presidency may be over and done with, the man is alive and well. There is an important role Bush can play now for the good of the country, but so far, he’s failing to do it.

Former presidents generally avoid criticizing their successors. Bush also knows that speaking out against Trump publicly would mean more than just violating a norm. Although Bush has reportedly shown disdain for Trump in private, going public would no doubt trigger Trump and his campaign to respond with unrelenting, ferocious attacks. Bush’s presidency looks less severe now thanks to the Trump horror show, and the last thing Bush wants is to see Trump remind Americans how horrible it really was.

In October 2017, at the Bush Institute’s Spirit of Liberty Event in New York, Bush essentially condemned Trumpism by denouncing bigotry, lies, and conspiracy theories while painstakingly avoiding uttering Trump’s name. Since then, Bush has done little more than express optimism for getting through political chaos by relying on what he insists are democracy’s self-healing powers.

More recently, in early June of this year, The New York Times reported that sources close to Bush revealed he is not supporting Trump’s reelection campaign after all. However, a Bush spokesperson quickly shot the report down, calling it “completely made up,” according to the Texas Tribune. “He is retired from presidential politics and has not indicated how he will vote,” the spokesperson explained.

Although a president’s service ends on the last day of office, a president’s legacy continues getting shaped based on what happens in the ensuing years. With Election Day approaching, time is running out for Bush to take a public stance and be straight with the American people about what’s at stake. Many Republicans respect Bush, so even a short statement warning of the dangers of a second Trump term could give certain voters the “permission” they need to abstain or cast a vote for Biden.

Although Bush may not be the maniacal monster that Trump is, he is not exactly known for making wise choices. So, even as the country Bush governed falls apart and the party he proudly led becomes increasingly unrecognizable, Bush will probably choose cowardice—especially if he thinks Biden will win regardless. However, no matter what the outcome of this election, Bush’s refusal to step up will have the same result: it will further cement his legacy as a great American failure.

← Eric Trump just stepped in itDonald Trump really is trying to take everyone down with him →
Posting....
Scroll To Top