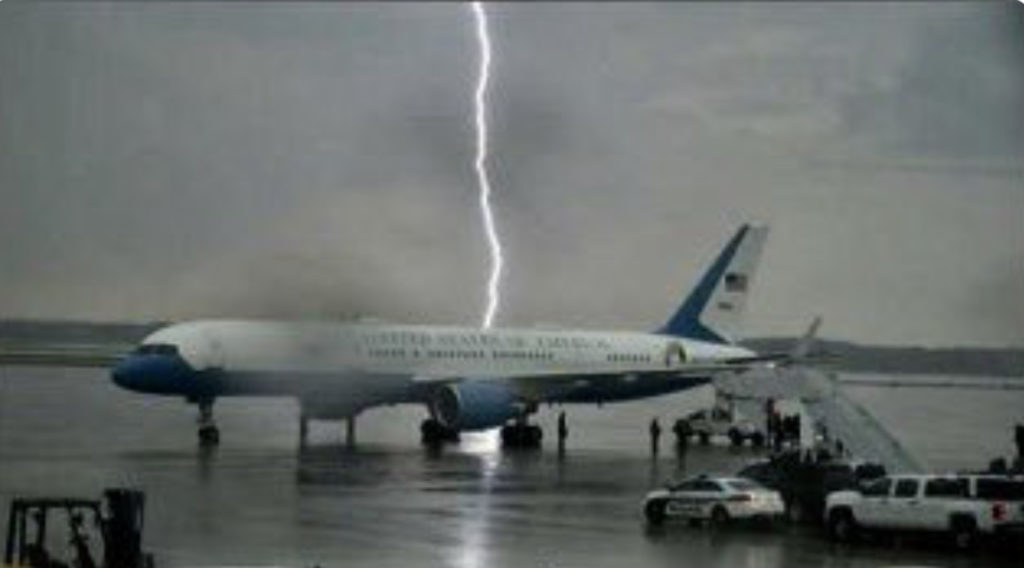 Over the past week, Donald Trump has altered a hurricane map with a Sharpie to try to cover for his own mistake, and he’s announced that he had secretly invited the Taliban to Camp David. At this point the guy is clearly so far gone, very little would surprise us when it comes to his increasingly erratic, deranged, and incoherent behavior. That said, Trump just found a way to do it.

Donald Trump took a trip to North Carolina today, and a bolt of lighting apparently came close to hitting the plane. We say “apparently” because it was Trump who posted a photo of the supposed incident, and for all we know, it’s just something he drew with a more sophisticated Sharpie. What’s weird is just how excited Trump was that he nearly got hit by lightning.

Trump tweeted “Departing MCAS Cherry Point in North Carolina for Fayetteville, North Carolina. This is amazing!” He included this photo:

Not surprisingly, everyone quickly began piling on. Most respondents were either disappointed that the lightning didn’t actually hit Donald Trump, amused that God appeared to be trying to take Trump out, or confused as to why Trump seemed to think it was so cool that his plane almost got hit. What next? Will Trump be seen running around his golf course, yelling around about how cool it is that lightning is striking, while waving a nine iron in the air? This guy is even further gone than we thought.