Donald Trump has had a very productive weekend, but only in terms of his Twitter output. While the president ranted about quite a variety of subjects, there is a clear frontrunner – something that is obviously very much on his mind right now – and that is the trade war with China that the U.S. is currently involved in.

It was on Friday that the Trump administration announced an increase from 10% to 25% on $200 billion worth of Chinese goods, and China retaliated quickly with plans to impose new tariffs on $60 billion worth of goods imported from the U.S., effective June 1. Inevitably, the stock market reacted to the tit-for-tat between the world’s two largest economies and promptly took its deepest single-day plunge since January of this year.

Meanwhile, the actual negotiations for a trade deal between the United States and China seem to be going nowhere in particular, which accounts for the increasing exasperation of the supposed dealmaker-in-chief, who went from calling the talks “candid and constructive” on Friday, to eventually telling the Chinese that the deal would become “far worse for them” if negotiations were to drag on for very much longer.

It is expected that Donald Trump and Chinese President Xi Jinping will get a chance to talk on the sidelines of the G20 summit scheduled to take place in Japan in late June, and both Treasury Secretary Mnuchin and U.S. Trade Representative Robert Lightizer have received invitations to come to Beijing for further negotiations. But in the meantime, more tariffs imposed by either side will come into effect and will eventually have economic consequences. Thus, the question of who is going to pay for the ongoing trade war is being discussed with increasing urgency.

This question was at the center of an interview Larry Kudlow gave to Fox News’ Chris Wallace on Sunday, in which Trump’s top economic adviser had to concede that it is in fact U.S. businesses and consumers who are going to pay the increased tariffs. With this admission, Kudlow essentially exposed Donald Trump’s claim that tariffs are “paid for mostly by China, by the way, not by us” as an inaccurate statement. Furthermore, Kudlow admitted that it would most likely be American farmers that would be hit hard by retaliatory Chinese tariffs.

Apparently, Donald Trump has been made aware of the fact that alienating this part of the Republican voter base could become a serious problem. In an effort at damage control, Trump told reporters at the White House on Monday that “we’re going to take the highest year, the biggest purchase that China has ever made with our farmers, which is about $15 billion, and do something reciprocal to our farmers, so our farmers can do well.” In other words, the Republican president is planning to use subsidies and redistribution to dampen the effects of his trade war.

Trump also referred to U.S. farmers as “Great Patriot Farmers” in a tweet which prompted a number of biting comments from people familiar with the propaganda lingo of the former Soviet Union. “Toil hard in the fields great patriot farmers of Trumpistan! Let this year deliver us a rich harvest so we exceed Chairman Trump’s 5 year plan!”, one tweeter named @jerweber quipped in a tweet that came with a photoshopped version of an old Soviet propaganda poster: 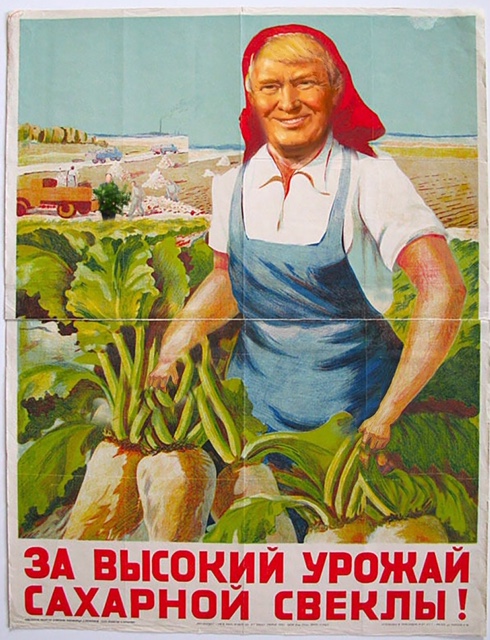